A relatively quiet week or so has been punctuated by another trip to London and the return from Australia of Youngest Son (YS).  YS and his Northern Irish girlfriend have been working (and playing) successfully in Australia for almost three years.  It’s great to have YS back in closer proximity after so long but I’m sorry we no longer have such a good excuse to visit Australia!

It will be interesting to see how things work out for YS and his girlfriend in London during such a precarious time for the United Kingdom.  Fortunately, they very excited by the prospect and are far more optimistic about life in general than I.  They made a great life in Australia from a standing start and I’m sure they will employ their energy and contacts to do the same in London.

I continue to make the most of my opportunities to visit the excitement of London with overnight stays in my old flat.  I based my trip up to London this time around another reunion of old work colleagues – this time from a bank I worked at 15 years ago.  Once that get together was in the diary I could fit in other things around it.  I saw a film (High Life) with Eldest Son (ES) (which was more interesting than truly enjoyable) and, as has become my norm, went to The Lantern Society Folk Club and a couple of exhibitions.

The first of these exhibitions was a history of Writing at the British Library.  This shows how different types of writing emerged amongst early human communities roughly simultaneously in a several different places across the globe.  This accounts for the huge variation in language types and structures and also the variety of writing styles and media through modern history and today. 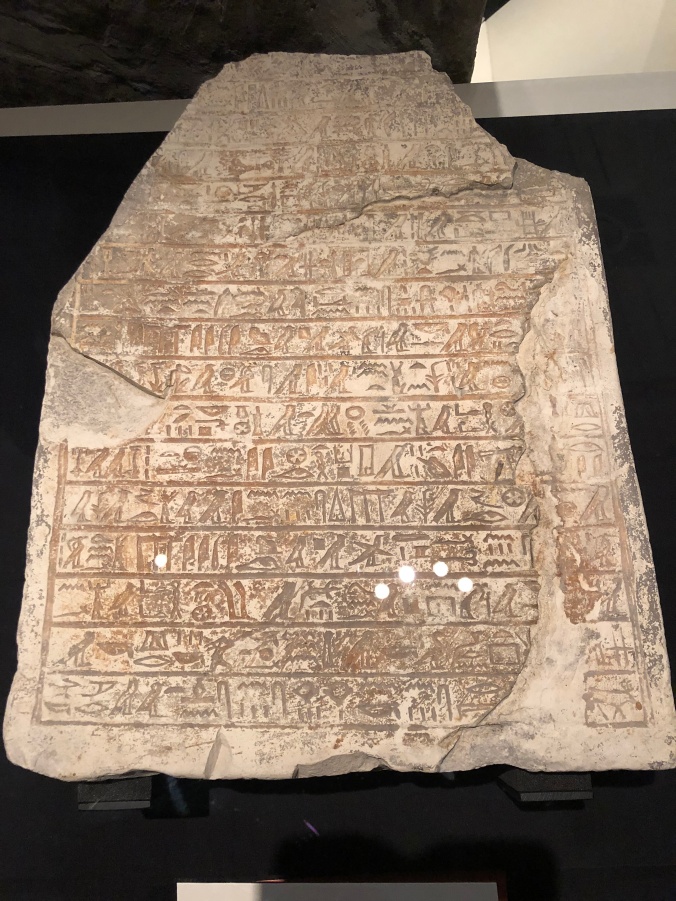 The exhibition then focuses on the development of our alphabet from images (e.g. an ox head shape for the letter ‘a’) used in Egypt.  These were refined progressively through simplification and transformation by the Phoenicians, the Greeks then the Italians and, especially, the Romans (who got us writing from left to right).  Further evolution of our western writing styles, fonts and media to develop readability, speed of writing and then mass production are explained clearly and interestingly with lots of tangible examples.  I became thoroughly absorbed in the exhibition. 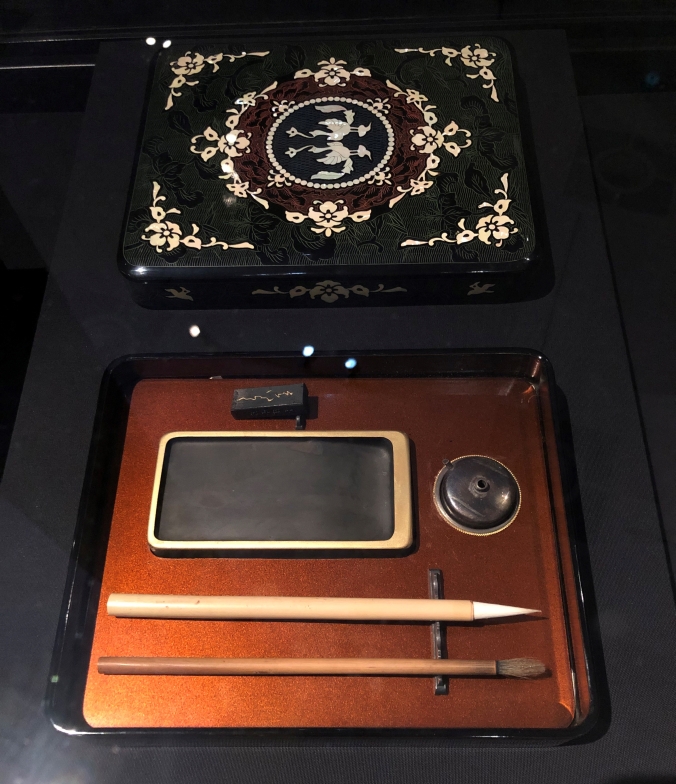 The British Library has such beautiful texts in its possession to illustrate every development in the art and science of writing.  In addition to the examples of writing, there were sections on writing materials spanning examples of use of clay, wax, metal, stone, skin, palm leaves and, of course, the early efforts to produce paper (by the Chinese).  Printing innovations, writing implements (including a comparison between mass produced BIC biros and Montblanc fountain pens) and much more is covered.  It is a multi-faceted and fascinating exhibition. 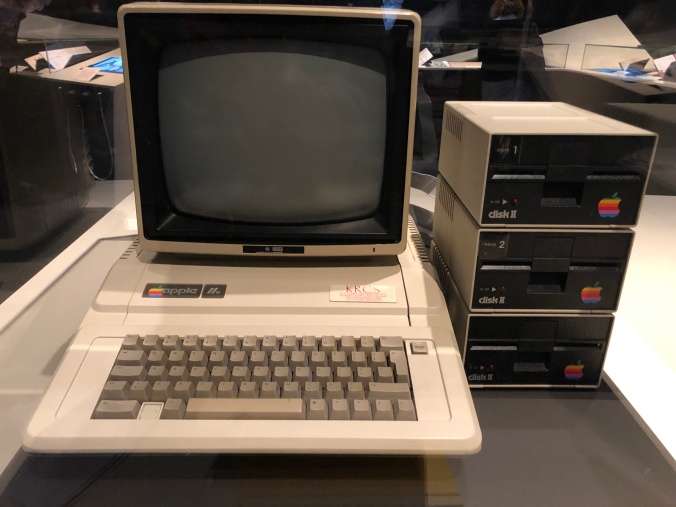 Less successful is the exhibition of Artificial Intelligence (AI); More Than Human at the Barbican.  I am very interested in this topic and was looking forward to the exhibition.  It is large and I spent three hours viewing it.  However, I left vaguely unsatisfied; I’m not sure I have worked out all the reasons why yet.

I went on the first day of the exhibition and some of the interactive exhibits needed tweaking to be successful.  But a more fundamental weakness is the amount of space devoted to cultural roots relating to the human desire to animate the inanimate and to create non-human life (Frankenstein for example).  This meant that, for me, there was insufficient focus on current and future use of AI.

The history of AI is laid out in detail and was a little overwhelming.  I invested a lot of time in understanding the key developmental moments, the surges in optimism surrounding the AI technology (the ‘Golden Ages’) and the periodic ‘winters’ when that optimism seemed misplaced.  There is also good information that I recall from when I used to work in Information Technology on the differences between Expert Systems and Learning Systems, and between simulation, understanding and intelligence.

Exhibits In The AI: More Than Human Exhibition (An Interactive Model For City Planning, Aibo The Robot Dog And A Robot Able To Mimic Human Movement)

That laid a good foundation for the latter sections of the exhibition which focus on current and, to a degree, future practical use of AI.  The examples on show, though, often seemed a little perfunctory and rather unconnected.  Some demonstrated what I would consider to be advanced computer power not, specifically, AI.

However, there were some good examples too.  These include those showing how AI is accelerating and improving areas as diverse as medical understanding and treatments, pedestrian and driver safety, city planning, customer problem solving, education and even dating.  There are also sections (too brief in my view) on the ethics of AI.  For instance, these include the dangers of AI in war, the risk of bias being built into the algorithms, and of AI being used to undermine our privacy, freedom and perception of the truth.  The exhibit showing AI helping lip-synching of Barack Obama was a rather chilling demonstration of the latter.

Since I’m a Barbican Member, I can go again for free and will plan to take ES who is also interested in the potential (and dangers) of AI.  Maybe with his insights alongside me, I will enjoy the exhibition more.

Back home, the focus is on catching up with YS (while he stays with us to gird himself for his move to London) and on gardening.  Long-Suffering Wife (LSW) has got large parts of the garden looking very full and attractive. 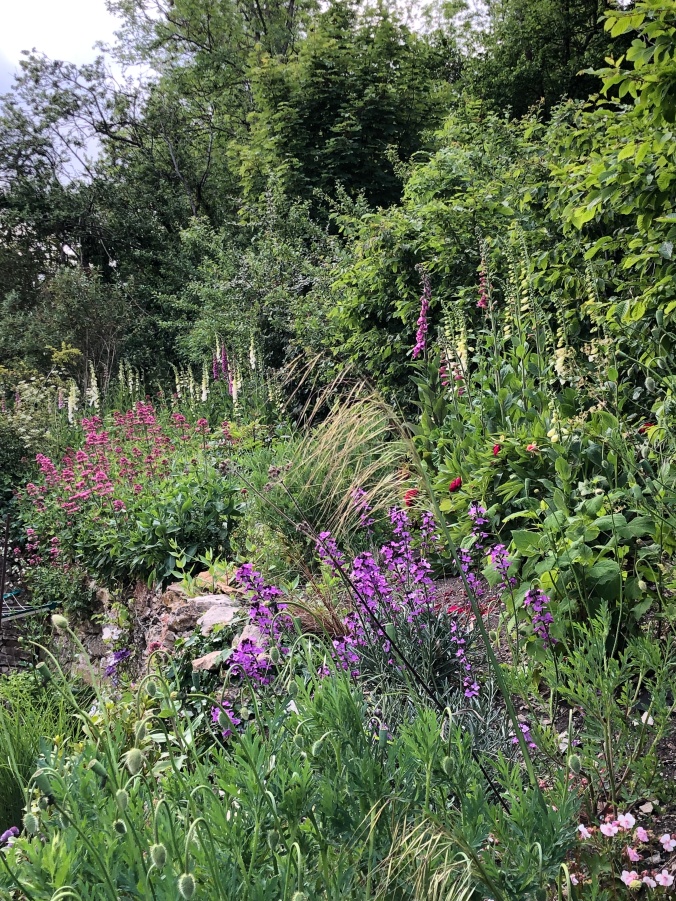 Foxgloves, Erysimum, Geraniums And Other Flowers At The Back Of Our House

My vegetable seedlings are planted and just await proper rain and, no doubt, a slug onslaught.  The meadow is looking lush and healthy. Just a few more degrees of heat and summer will be here…..

Our Favourite Irises In Our Garden