While Long-Suffering Wife (LSW) and I were in London awaiting Middle Son’s (MS’s) final operations and discharge from hospital, we did, as predicted, fit in a couple more exhibitions:

The visits took our minds off MS’s predicament, filled in the non-visiting hours at the hospital and were well worth seeing anyway.

The Rakowitz exhibition at the Whitechapel Gallery was an interesting mix of visual effects across eight ‘installations’.  All of them related to history and most, a little depressingly, draw inspiration from examples of thwarted hope.  For example, the first exhibit, called ‘Dull Roar’ is a very large inflatable building depicting a multi-racial social housing experiment in St Louis, Missouri.  Its cyclical inflation and deflation over a period of a few minutes is a metaphor for the initial hope when the building was opened and its failure as it fell into disrepair, became a focus for social unrest and was ultimately demolished.

‘Dull Roar’ (Foreground) And ‘White Man Got No Dreaming’ By Rakowitz

Other rooms and exhibits highlight book destruction, the destruction and reconstruction of antiquities in the war-torn Middle-East and the rise and fall of The Beatles.  The latter includes off-cuts from a 1970 documentary film of the group and many artefacts relating to The Beatles.  These are annotated with postulations about how the break-up occurred and parallels with late 20th century North African history.  The film recounted the The Beatles’ last attempt to repair their relationship with a triumphant concert in North Africa.  The concert never happened. 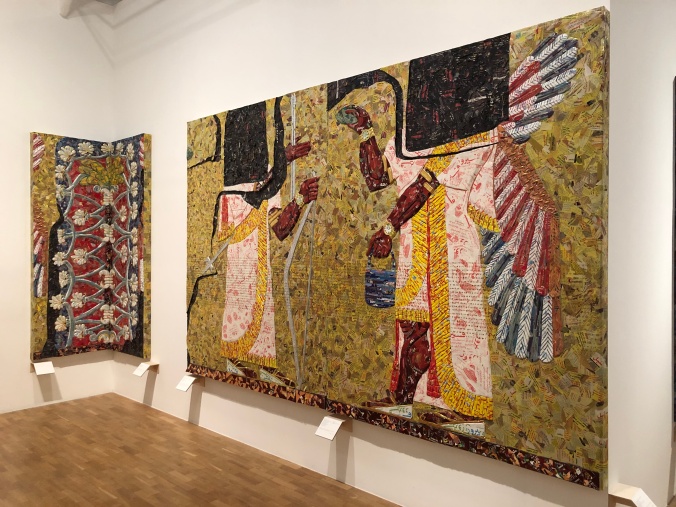 The exhibition had a lot of variety and depth and made good use of the Whitechapel Gallery space.

The Gagosian Gallery in Grosvenor Hill (I now find that there are three Gagosian Galleries in London alone and many more worldwide) is also a great art space with large, light rooms.  It’s an interesting rectangular and ultra-modern building tucked behind Berkeley Square.  Inside were a relatively small number of Francis Bacon’s double figure paintings.  All were instantly recognisable as Bacon’s work and about half of them were as dramatic and terrific as I had hoped.

One of the Gagosian Exhibition Paintings By Francis Bacon

Most of the works were, as expected, clearly inspired by his anxious, passionate and probably violent relationships.  What was more of a surprise was the interest he had in monkeys and baboons that had been engendered by his trips to Africa.  A couple of the paintings reflected this.

Unlike the Whitechapel Gallery which was a bit pricey to visit, the Gagosian is free.  What’s not to like! 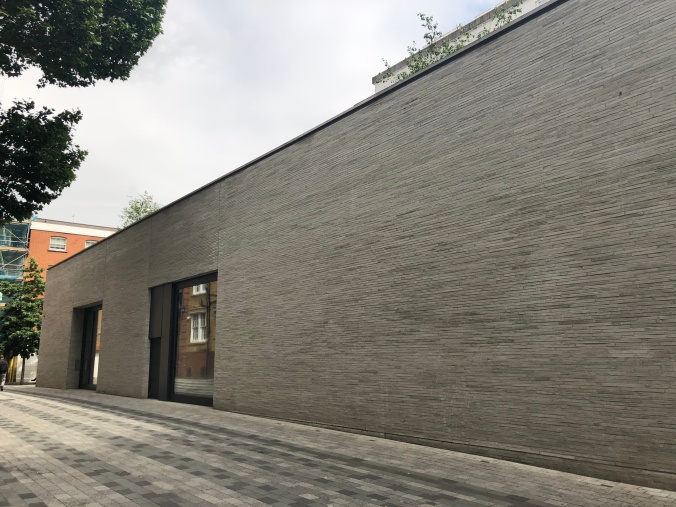 Now we are back in Gloucestershire with MS.  Fortunately the weather has remained wonderful.  The garden is in peak colour – although it could do with a refreshing downpour – and the vegetables are growing faster than the deer can eat them.

The New Garden In Bloom

I have reverted to my pattern of last summer of walking in to the local town’s shops before breakfast when it is cool.  That means that LSW can get to work without us leaving MS alone for long and gives me the chance to enjoy the local countryside in the lovely morning light.  We have much to be thankful for.

View Towards Nympsfield On The Walk To Nailsworth 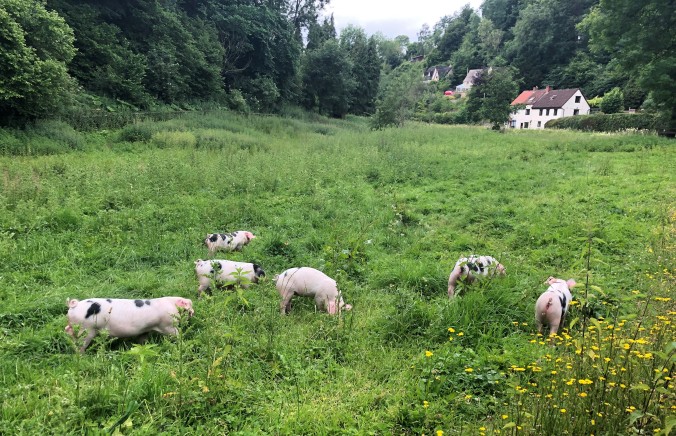 It’s been nearly two weeks since Middle Son’s (MS’s) accident on a pedestrian crossing.  LSW and I are popping up and down to London to see MS while he is in hospital waiting for, and then recovering from, the operations to repair him.  We have the flexibility to be able to supplement and fit in around visits from his others.  Outside of visiting hours we are able to visit London-based exhibitions and in between trips to London, we tend the everyday of house and garden. 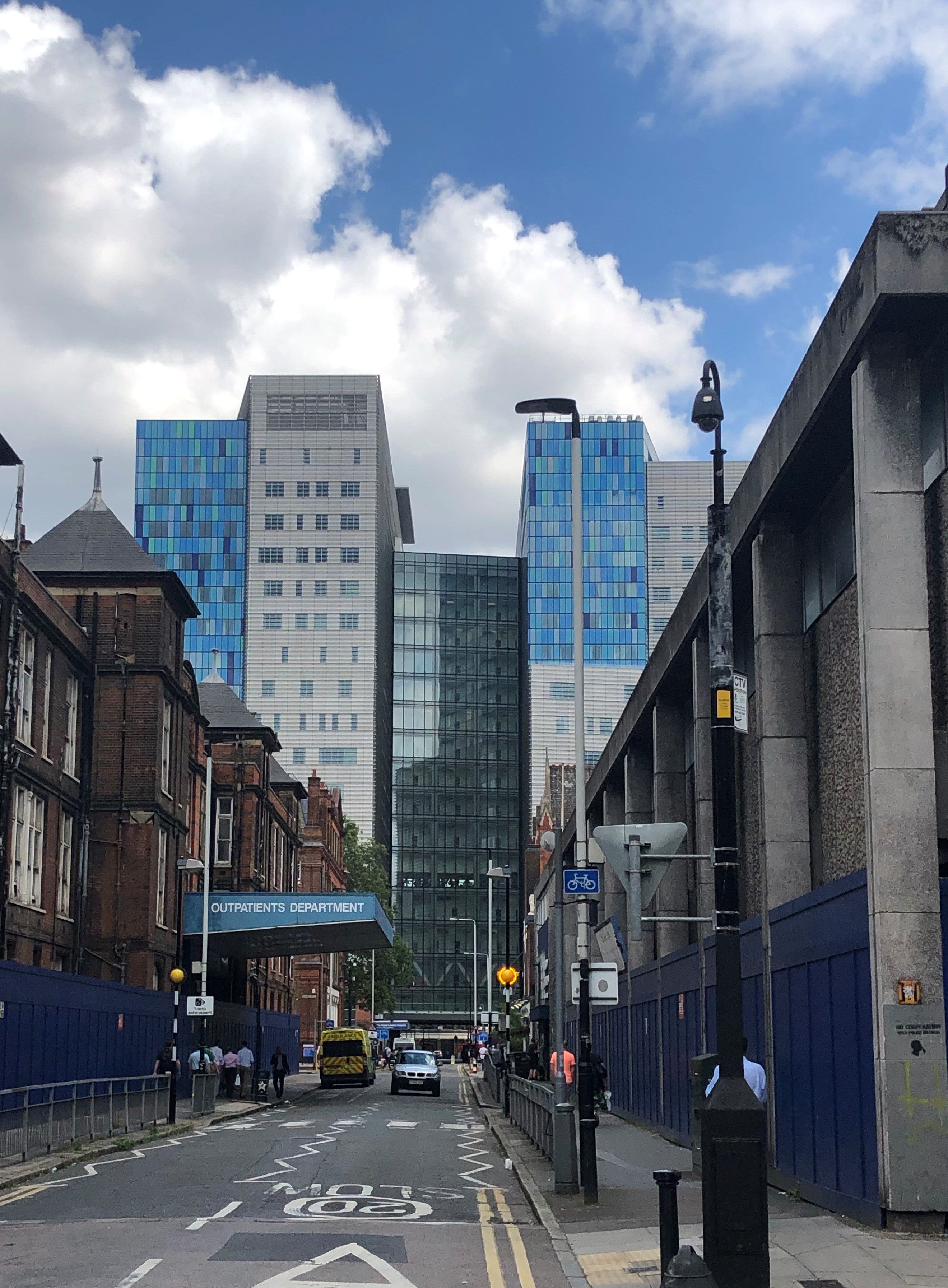 The garden is certainly looking full and colourful.  After an unusually slow start, the vegetable patch is starting to come to life.  The slugs, deer and pigeons are enjoying a lot of the potential vegetable and fruit produce.  However, I hope to pick the blackcurrants that survived the pigeon onslaught next week and chard, spinach and beetroot are now ready for the first harvests. 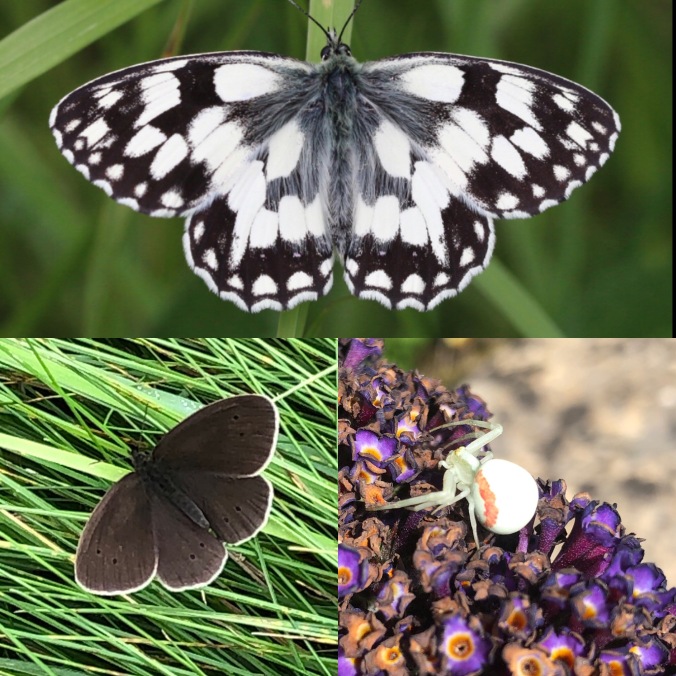 Marbled White and Ringlet Butterflies And A Crab Spider

The meadow is also looking healthy and, in this last week’s sunshine and warmth, it has been full of butterflies and other insects.  Youngest Son (YS) and his partner have been staying with us and have been able to enjoy the garden before swapping the rural peace for their new life in London.  It has been great to have had their cheery demeanour around the place.

The London exhibition LSW and I went to see in a few spare hours was the Dior: Designer of Dreams exhibition at the Victoria & Albert Museum.  The ostentation on show was perhaps the least appropriate thing to appreciate while our minds were wrestling with the gritty practicalities of MS’s circumstances.  However, it is a very stylish and well-presented show covering Dior’s clothes, perfumes, partnerships with makers of accessories and seamstresses. 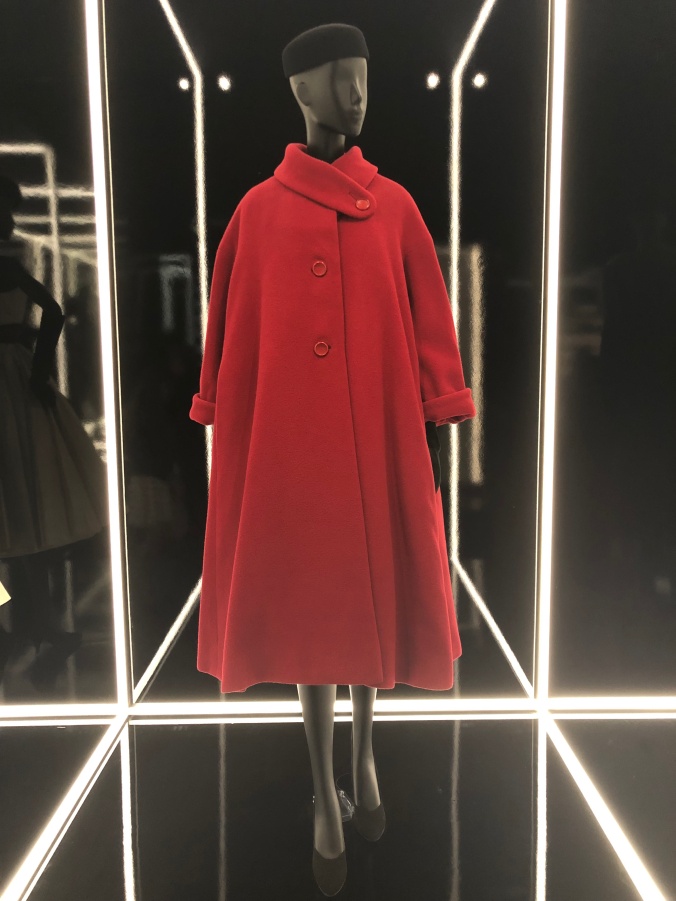 The outfits on show demonstrate Christian Dior’s career and then the contributions of the lead designers who followed him in driving forward the Dior brand.  The clothes are consistently beautiful or dramatic or both and the rooms showing his ball gown and garden-influenced designs were particularly impressive.

Dior Perfume Bottles And Travel Set From The 1950s

At the end of the exhibition was a wall with a quote from Christian Dior: “In the world today, haute couture is one of the last repositories of the marvellous”.  The show managed to underline that.

Exotic Dior Dresses Influenced By His Travels in Japan and Egypt

I also managed to get to see a free gig by D’Voxx at Rough Trade East.  I knew nothing about this electronic duo before turning up but it was another temporary but welcome distraction from reality.  The music they played was interesting and got me nodding away to the beats, but what made the gig unusual was that both performers were using modular synthesisers that looked ancient and that seemed to require a lot of wire waving and plug swapping alongside the normal knob-twiddling.  It was quite a sight and a fun experience. 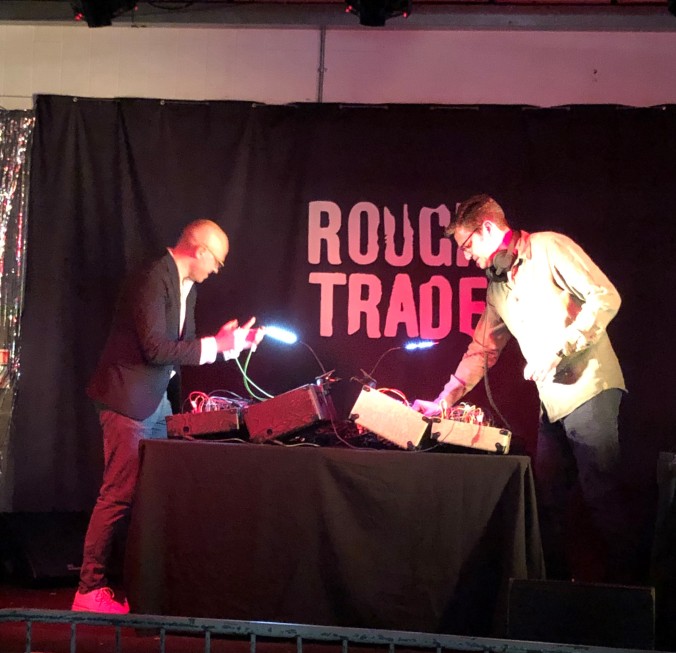 LSW and I are heading back to London tomorrow.  Maybe we will find a couple more diverse distractions like Dior and D’Voxx to divert us before MS’s final operations and discharge.  Fingers crossed for him.