Now I am retired, and no longer have to spend 50-60 hours a week working or travelling to and from work, I can extend what used to be rushed tasks at home over longer periods.  I can also take a few more risks with events that I invest time in.  There have been some good examples of both in the last week or so.

I have spoken before in this blog about what I called ‘speed gardening’.  This was the result of the pressure I felt to get substantial tasks in the garden done in the slivers of time available at the weekends before my Sunday commute back to work in London.  I rushed around trying to get things done and, while it kept me fitter than I am now, it wasn’t altogether satisfactory enjoyment.  Now, if a job doesn’t get done as planned on one day, well, there is always tomorrow!

This week’s example was ‘doing the bonfire’.  The pile of garden detritus requiring disposal – and burning it is the most convenient if not the most environmentally friendly way – had become huge following some recent tree maintenance.  I had the time to salvage logs and ‘loglets’ pretty thoroughly but there was a large amount of brash together with a solid mass of other woody matter.  I moved the base of the bonfire pile (so any small creatures could escape) and organised the brash so Long-Suffering Wife (LSW) and I could load it easily onto the flames in batches. 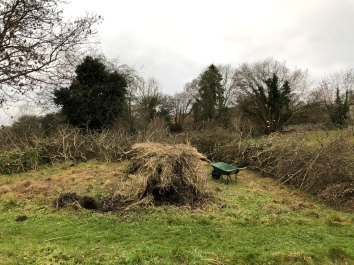 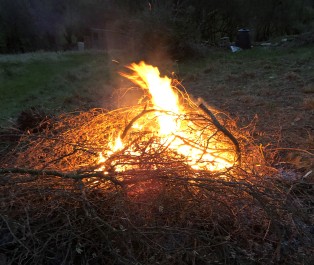 We managed to clear half the waste in a couple of hours before darkness descended.  The process was very satisfying in some base animalistic way.  In my more relaxed and retired mode, I wasn’t concerned that we didn’t finish.  There is always another day.

The example of having more time to take risks with events was that, when I went up to London for a couple of days this week, primarily to see the Jusepe de Ribera exhibition before it closes at the Dulwich Picture Gallery, I also booked a couple of other events about which I knew very little.  One was successful the other rather less so but, either way, I have so much more leisure time now that success or otherwise seems less crucial.

Of course, a successful event is still to be aimed at (time and energy is not infinite, after all). Certainly the Ribera exhibition, entitled ‘Art of Violence’, was riveting and impactful.  There weren’t many large paintings but those that were on show really conveyed the pain of martyrs on the way to their martyrdom.  As impressive were the numerous, much smaller sketches and wash and ink drawings of torture and martyrdom.  These were so intricate and compelling that they drew you into close inspection despite the horror they depicted.  My visit was complemented by the chance to catch up briefly with Eldest Son’s (ES’s) previous girlfriend who works at the gallery; we remain friends. 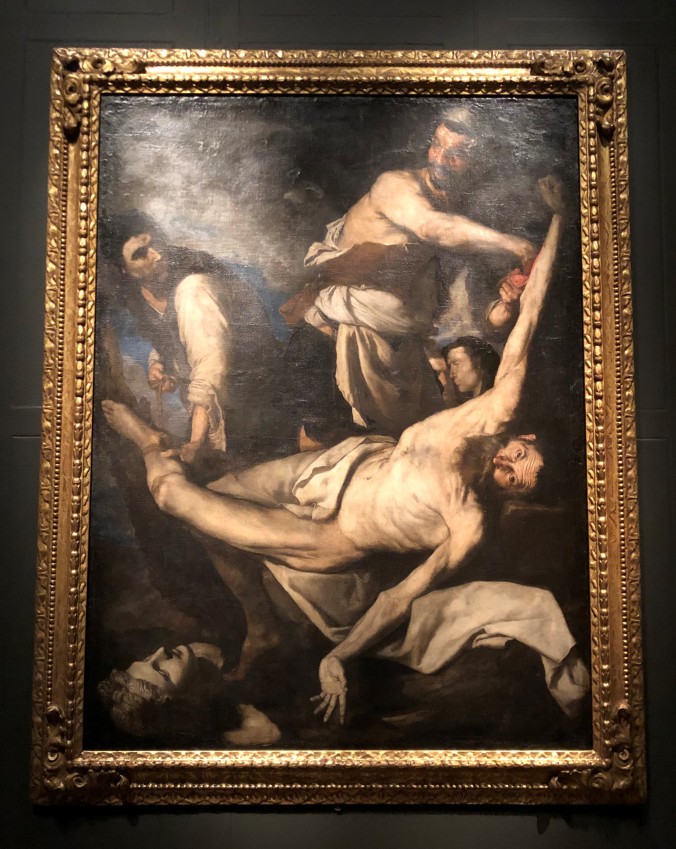 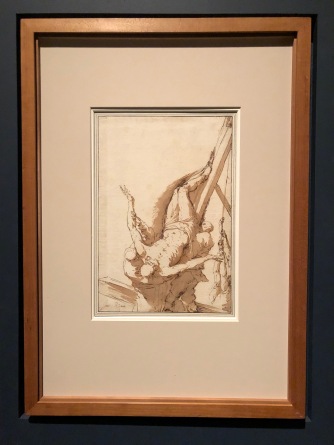 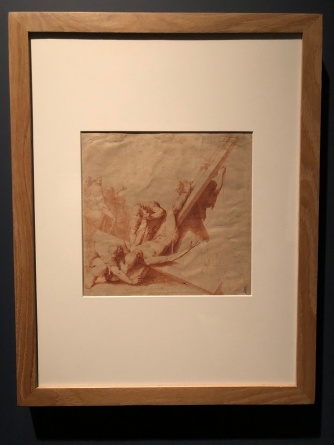 Examples Of Ink And Wash Drawings By Ribera

Another, more unexpected success, was that ES and I went to a lecture on, and demonstration of, how Russians in the Cold War created illicit copies of western music during Stalin’s regime (and often went to jail when caught).  The fascinating twist was that, because materials were scarce, the early copies were made by creating grooves on discarded x-rays with home-made lathes.  The resulting ‘records’ therefore had x-ray pictures on them.  Although the sound quality wasn’t great, the recordings were much sought-after snatches of the forbidden jazz and rock and roll of the west and each was unique. 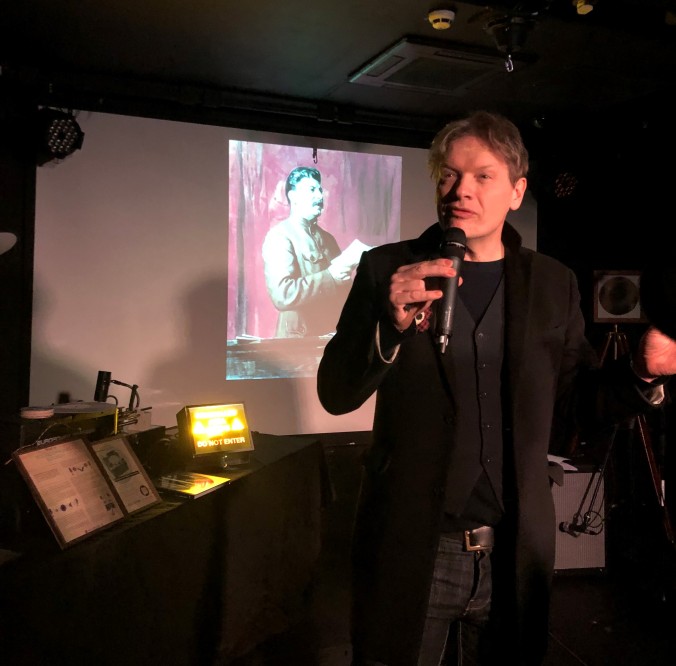 Pictures and video footage of interviews with some of the protagonists in the schemes to create the lathes, to procure the x-rays (being discarded by hospitals because they were inflammable and presented a fire risk) and to cut the recordings added extra life to some well told stories about the copying process.  These stories recalled, and tied in neatly with, aspects of the film Cold War by Pawel Pawlikowski that I saw with ES recently, books I read years ago by Josef Skvorecky about underground music in Czechoslovakia, and also an excellent book I read recently called A Gentleman in Moscow by Amor Towles.

The evening culminated in Thurston Moore – a guitarist previously with Sonic Youth – recording a couple of things onto x-ray disks so they could be played back to us.  It was pretty visceral stuff – in a very different way to the Ribera exhibition – and ES and I will remember it for a long time. 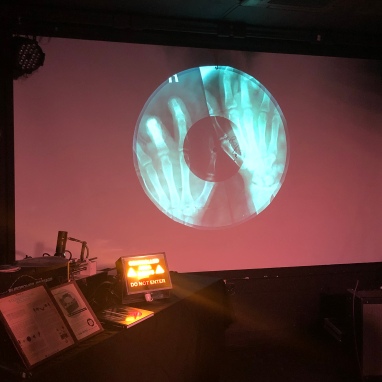 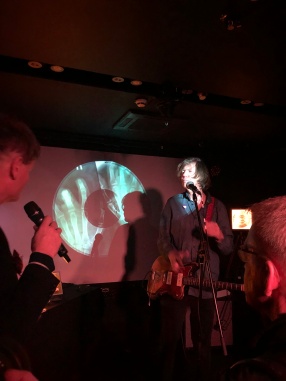 The X-Ray Audio Project With A Thurston Moore Demonstration

Less successful, but entertaining nonetheless, was a gig I went to in one of my old stomping grounds in Homerton, Hackney.  Chats Palace was the venue and it seemed much the same as I could remember from when I was last there in the early 1980’s.  I saw William Doyle who I liked in his incarnation as East India Youth a few years back and who has produced some interesting ambient music recently.  He now has a new band who are preparing to release their first album together.  They were good in parts but, I felt, still finding their feet. 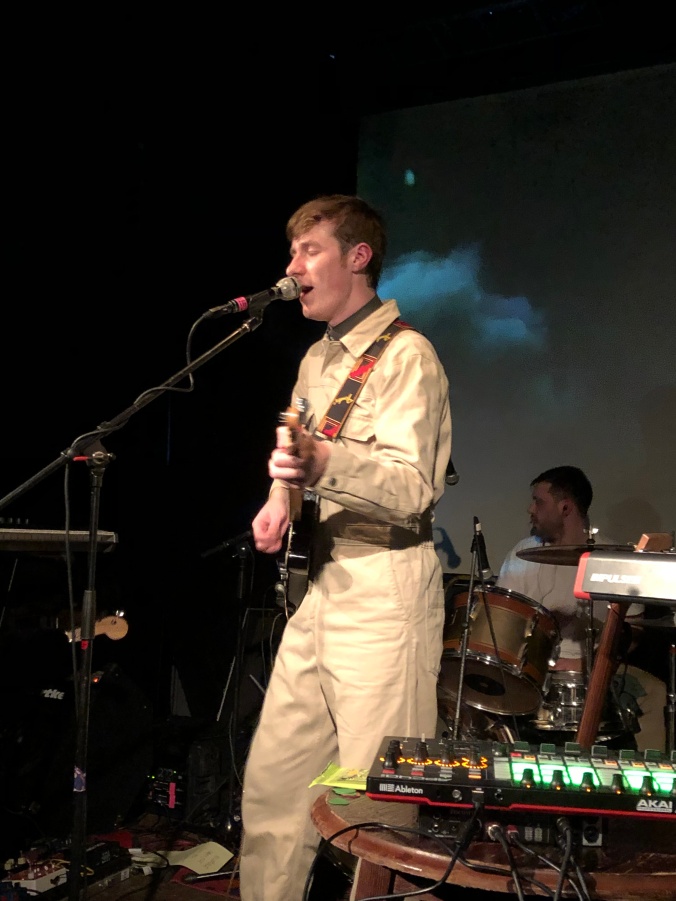 I may have much more leisure time now but, when I’m in London, I have to squeeze in plenty of activity.  Fortunately ES and Middle Son both had time for breakfast with me.  I also walked around Dulwich Park, visited Rough Trade Records (as usual), went to Southwark Cathedral for the first time, snacked in Borough Market and, in lovely weather, took in the scale of London from London Bridge.  I still love London and have the time to enjoy it. 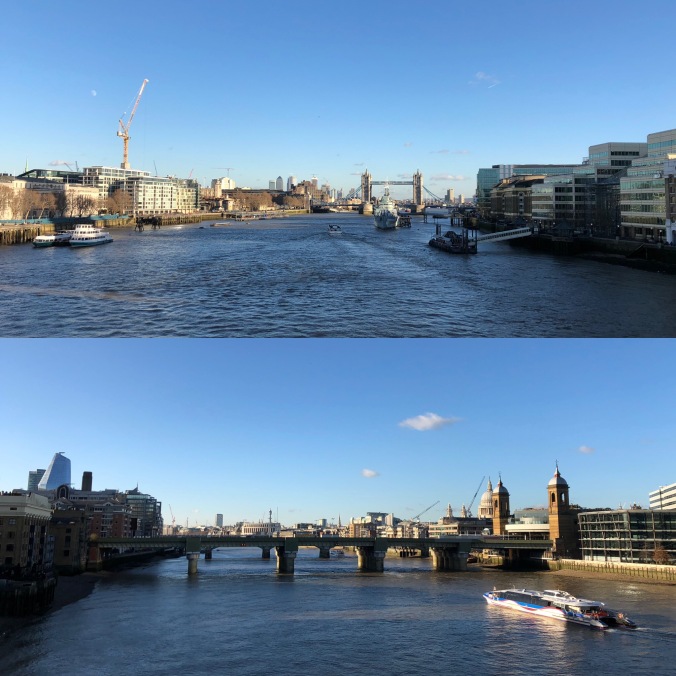 The first snowdrops have arrived.  I sensed a little more light in the kitchen when I came downstairs this morning.  Moles are extending their network of tunnels and earth mounds across the vegetable patch.  These are some of the diverse, recent signs that we are moving inexorably towards Spring.  Now Christmas and New Year celebrations have passed, I’m looking forward to that. 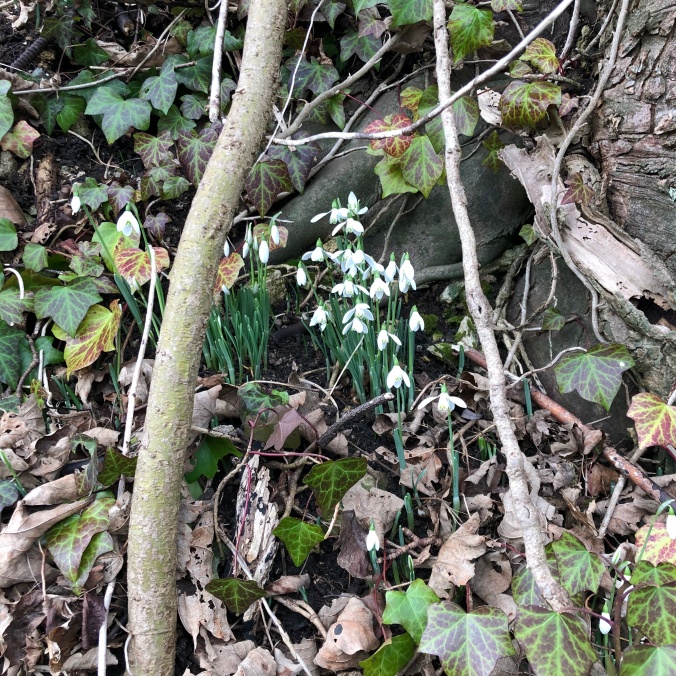 The First Snowdrops I Have Seen This Year

The relatively quiet period following New Year is a good one for taking stock and making New Year resolutions.

This time last year, I was settling into retirement and thinking about how my first full year of retirement might go.  It felt important then to think about my New Year resolutions as markers for desired progress in a couple of directions.  Overall, 2018 was very enjoyable for me and retirement has lived up to expectations even though, as I pointed out in my last blog post, I didn’t achieve all my specific objectives.  Going into 2019, I don’t feel I need to change very much.

So, many of my resolutions for 2019 are to continue where I left off in 2018.  For example, the objectives I had around health – losing weight, drinking less, walking more – can be simply perpetuated with the targets I largely achieved last year, namely:

Also, I will carry forward the objective to implement better composting arrangements in the garden.  This sounds trivial but it requires me to get my achy back returned to something like full strength.  It also requires confirmation of new compost bin location. In turn, that depends on planning with Long-Suffering Wife (LSW) the future for the old and gradually collapsing stables in our field.  This is because installing the new bins will involve significant earth and rock moving and don’t want to have to relocate them nor restrict the options for the stables’ demise or transformation.  This resolution is therefore a proxy for taking a few significant interim steps as well as one aimed at improving my compost.

I only have three new resolutions.

The first is less news and more music.  This recognises that, in recent months, I have been listening to a lot of news (especially related to Brexit and President Trump).  On average, I estimate I have been listening to 4 hours of radio news each day in addition to reading the Guardian newspaper reasonably thoroughly and watching the late evening news on TV.  I want to stay current and have an informed view but this is probably excessive (especially as I get so frustrated with what I hear).  On the other hand, I have multiple lists of new music I want to listen to and I want to re-appraise some of the best of what I already know.  Simple: dial down BBC Radio 4 news, dial up Spotify, and keep going to gigs/concerts.

The second is to step up the number of trips of 1-2 days that I make with LSW to other parts of the United Kingdom.  I have started the way I mean to carry on we made a short-notice trip to The Gower Peninsula in Wales when we saw the weather was going to be nice earlier this week.  We re-visited a bed-and-breakfast, a restaurant and some coastline we had good memories of from almost three years ago.  The two days away were a good template for further excursions we will make on top of the frequent trips to London I plan to continue well into 2019. 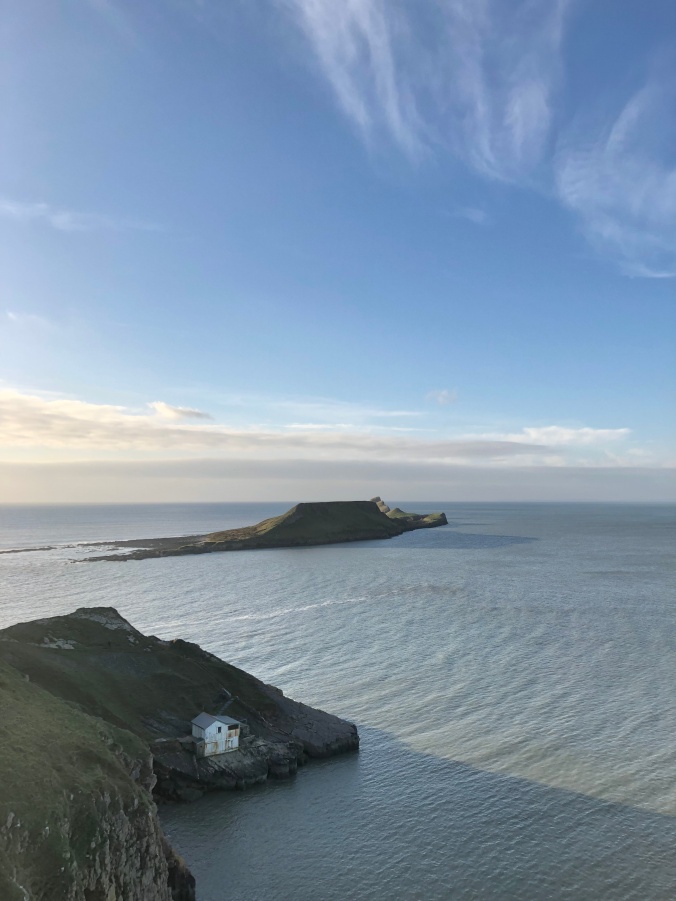 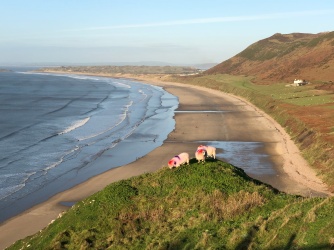 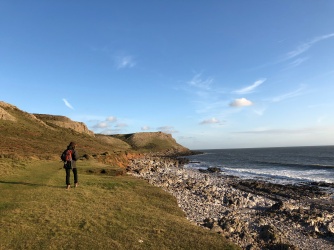 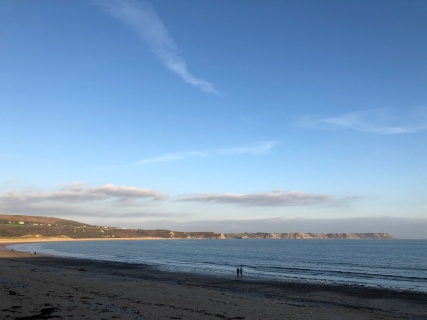 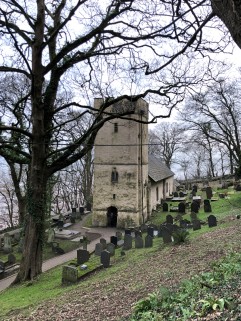 Finally, although I’m still not ready to add a commitment to voluntary work to my 2019 objectives, I do think I should try to develop a plan for a plan for volunteering in the next year.  I know that I should find time for ploughing something back and finding a new sense of purpose and so will look at some options.  Frankly and selfishly though, and with the brief but quite intense experience of helping with the local village’s Neighbourhood Plan last year behind me, I don’t want hard new commitments to get in the way of everything else I am enjoying so much.  I won’t be rushing into anything.