A lot of the last week or so has been taken up with preparation for, execution of and then follow up from a meeting held in our village hall to discuss, our village’s response to the climate emergency.  The Chair of the District Council’s Environment Committee presented to us the Council’s position on the climate emergency.  Then we held a workshop to share ideas on what we can do as individuals and collectively in our village to respond.  We finished up with a visioning and priority setting session.

The meeting was organised by the Carbon Neutral Horsley group, of which I am a part, with the Parish Council.  Coincidentally, but aptly, the meeting was scheduled as Storm Dennis was near its height.  The meeting exceeded our expectations both in terms of how many people turned up (despite the weather) and in terms of the quality of discussion and ideas that were put forward.

It has now fallen to me to document and summarise these ideas.  Speed in doing so is important since we need sustain momentum and show that action is arising from the meeting.  This is quite interesting, worthwhile and almost exciting work.  Plus, it brings me closer to the heart of the village community.  That is something I am finding rewarding after so many years of working in London and being away from village activity except for weekends (when I just wanted to switch off from any demands and relax).

A wide range of topics cropped up at our village meeting on the response to the climate emergency.  Of course, cars (too many) and wildlife (not enough) were prominent themes.  These were also, again coincidentally, subject matter of two exhibitions I visited while I was in London in the days just prior to the meeting. 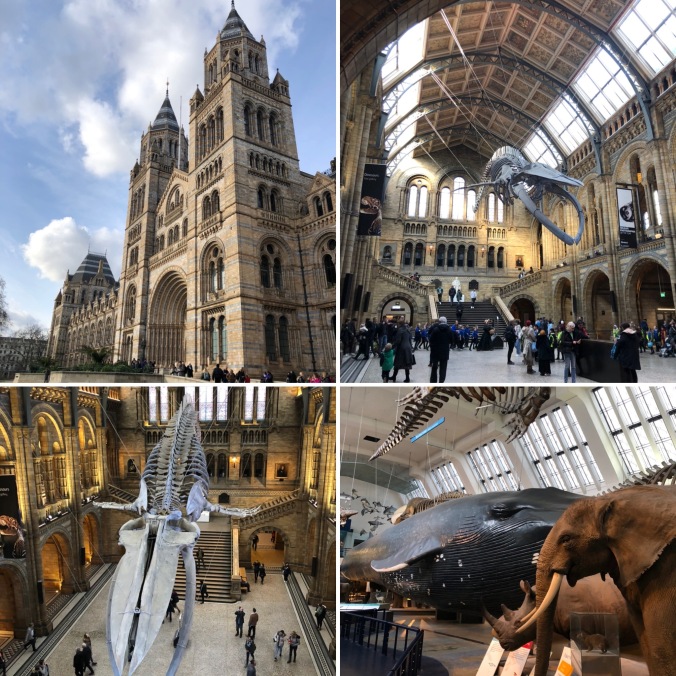 Views Of The Natural History Museum, Home of the Wildlife Photography Exhibition And Bringing Back Memories Of Taking The Kids Back In The 90s

The first was the Natural History Museum exhibition showcasing the Wildlife Photographer of the Year competition.  I try to get to this every year and the quality of the competition this year was on a par with the best I have seen.  Once again, almost every photo is incredible either in terms of its composition, the amazing aspect of nature it captured, or the unimaginable patience that had been required to get just the right shot at just the right time – or all of these things.

Wildlife Photographer Of The Year: Winner Of The Birds Behaviour Section, Auden Rikardsen

The captions accompanying each photo contain some amazing wildlife facts too – weddell seals can stay underwater for 90 minutes, golden eagles reach a top speed of 320km/hour when hunting, and hummingbirds beat their wings 85 times a second.  It is mind-boggling stuff.

Overall Winner of Wildlife Photographer Of The Year 2019: ‘The Moment’ By Yongqing Bao. Incredible Photo!

Also eyebrow-raising was that so few female photographers are represented (though almost half of the competition judges were female).  I can’t imagine why that is but I have become sensitised to this sort of thing having been to so many exhibitions in recent years that explicitly underline female contribution.

The second exhibition I went to see (with Youngest Son, which made this visit extra-special) was a major one at the Victoria and Albert Museum.  This shows the depth and range of impact of cars on almost every aspect of human life: social life, geopolitics, gender politics, city building, ecology, tourism, economics, landscape, industry, design and more.

‘Cars: Accelerating The Modern World’ Exhibition At The V&A – The First Automobile in 1888 (Benz Patent Motorwagen) And The Firebird Concept Car Capable Of Going 20 Times Faster in 1953

This is another excellent show.  It covers both the positive and negative aspects of the car as an innovation and possession.  For example, on the down side it portrays the impact on Ford’s assembly line manufacture on workers, the incidence and then response to car accidents, and the increasing awareness of the role of the car in accelerating climate change.

Relating to the latter, most ironic was an advertisement from Humble/Esso Oil Company showing an Antarctic glacier and emblazoned with the caption: ‘Each Day Humble Supplies Enough Energy to Melt 7 Million Tons of Glacier’.  It showed how we have moved on a bit in our awareness of a climate challenge.

However, this irony and concern is in the midst of more upbeat messages about how the car has delivered freedom, design energy and socio-economic transformation.  For example, the car enabled easier access to the countryside and so, a better understanding and appreciation of it.  There’s a fascinating section on how car manufacturers had to both create and respond to demand from women drivers and so encouraged gender equality. 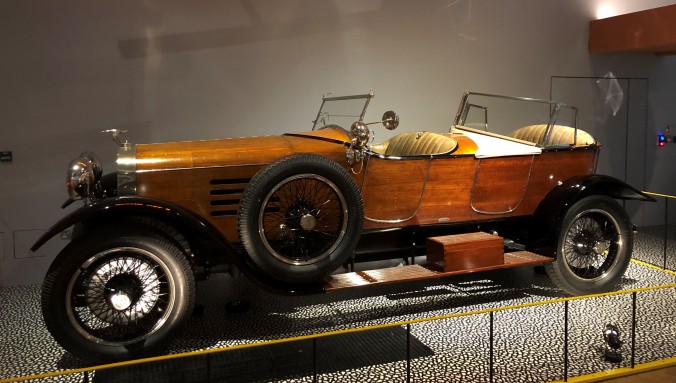 Epitome Of Car Luxury In1922; A Hispano-Suiza ‘Skiff Torpedo’

Above all, there are some marvellous and very shiny cars on show.  Some show off car design in response to the need for speed, some are the ultimate in luxury, others are tiny and economic vehicles built as the car industry responded to the threat of oil shortages.  Some exhibits show the demand for mass production, whilst others are pimped up one-offs to reflect the individualism, fashion preferences or status of their owners.

The exhibition, predictably, ends with an item on the future car and the imperative to respond to the climate emergency while delivering more flexible transport.  The future progression imagined here includes the further development of the electric car to reduce pollution, the increased safety of an effective driverless car, the shift from car ownership to transport by car as an on-demand service and, finally, flying, electric, driverless cars available on demand.  Cars have never been something I have enjoyed driving but I watch these evolutions with interest.

‘Cars: Accelerating the Modern World’ Exhibition At The V&A Starts With This Shiny E-Type Jaguar

I continue to walk a lot.  I walk with friends, with Long-Suffering Wife (LSW) and alone.  I walk routinely every day to get groceries and a newspaper from the local town.  I walk to football matches, I walk more aimlessly through the local countryside to take in the glories of local nature, and I walk around towns and cities I visit to take in their vibe.  I walk fast, I walk slow.  I walk a lot.

All this walking has been noticed in the village.  I was on a lengthy walk the other day and ended up a couple of miles away from home near the offices of a neighbour who lives near to us.  As she came out of her office, she noticed me walking so far from home and remarked: ‘endlessly walking again?’  I smiled and confessed to not having a great purpose to my walk but explained that the sun was shining and I felt I was making good use of the day.

Graffiti Under The Old Railway Bridge On The Way To Woodchester

Certainly, some of the walking is for walking’s sake and has no other real objective other than the health benefit.  I was therefore pleased this week to see a couple of vindications of walking as a health booster.  The first was in a casual blog like mine and the second in the Guardian newspaper.  It’s possible to find validation for almost anything online these days but finding support for what one is already doing is always comforting.

Dipper Spotted In A Local Stream

The blog I saw summarised some of the benefits of walking.  In essence, walking can help mental and physical health and prolong life.  It helps us control weight, reduces stress and, because it’s an outdoor activity, helps us produce vital vitamin D.

The newspaper article summarised a book by Shane O’Mara, a neuroscientist, called In Praise of Walking and was a more intricate argument for walking as a health (especially brain) enhancer.  O’Mara calls walking a ‘superpower’ that ‘unlocks the cognitive powers of the brain like nothing else’.  In his book, he explains how and why from a neuroscience perspective, based on personal experience and scientific study.  I’ll leave you to read the article if you want to know more, but I’m not surprised by the conclusions he draws; walking does make me feel good!

On The Cotswolds Tops

Since Christmas, in addition to the normal return and circular walks to the town and around our village, I have been on a few notable walks in the local area.

Just after Christmas several from LSW’s family and I went on a walk together in the Slad Valley just north of Stroud.  This was on the path of the recently established Laurie Lee walk.  Lee was, and remains, a famous local poet and the walk was dotted with plinths with some of his poetry.  Someone in our group had that bright idea of having one of us read out each poem; I don’t really ‘get’ poetry and I felt a little self-conscious doing mine. 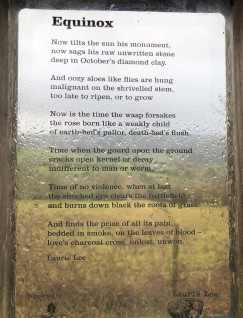 We planned to end the walk in time-honoured fashion in The Woolpack (Laurie Lee’s erstwhile local).  Unfortunately recent publicity for the walk and pub meant there wasn’t even standing room inside when we arrived.  It was an energetic and lovely walk though.

After New Year, my Best Man (BM) and his rather younger Chinese Girlfriend (CG) came to visit us.  BM loves walking and likes the contrast of our local, hill and valley landscape to that where he lives in Cambridgeshire.

We undertook a long local walk together (that LSW and I had recently discovered) despite CGs somewhat unsuitable footwear.  She endured the mud and blisters heroically but was put off a bit by the remains of a dead bird we passed on the way – it turned out that she doesn’t like to be close to birds and especially dead ones.

Imagine, then, LSW’s and my embarrassment when, on our way back on the walk, we unavoidably had to pass an ongoing pheasant shoot.  It was dramatic and noisy with 40 to 50 birds being shot out of the air in the space of 10 minutes as we passed.  It was an exciting sight I had not seen before but CG was understandably horrified.  It was unintended but not a good way to treat a guest!

Next week I’m off to Nottingham for my now roughly monthly visits to Mum and Dad there, and to London for a couple of days.  I’ll be swapping countryside walking for the urban stuff.