Some of the last week or so has been spent managing my disappointment that Forest Green Rovers (FGR), the football team I follow avidly and actively, just failed to make it through to the English Football League 2 (EFL2) Playoff Final at Wembley.  FGR have had a great season following the struggles experienced last year during our first season at this level.  However, we just fell short of entitlement to a third visit to Wembley in four years.  I’ve amended my diary to free up the play-off final weekend, responded to the commiserations from friends, and adjusted the focus of my hopes towards next season.

We (and I do think of FGR as a ‘we’) nearly managed automatic promotion but we faltered near the end of this season with a 4-3 loss at Crewe Alexandra having be3-1 up.  Then, in the play-off semi-final against Tranmere Rovers, the fine margins between success and failure fell against us.  It didn’t help that we had a player sent off in both home and away legs but, in truth, we also didn’t quite play to our potential.  Now we have to wait for a team rebuild for next season and see if we can challenge for promotion again.  I’ve renewed my season ticket but am already missing the weekly routine of live football! 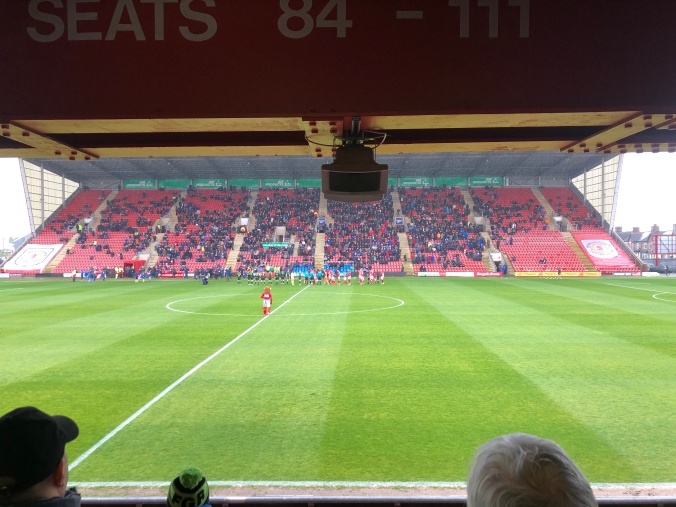 FGR Lining Up At Crewe Alexandra. We Are Getting Used To Playing At These (Relatively) Big Stadia

Long-Suffering Wife (LSW) does long-suffer when it comes to my obsession with football.  But she and I did have a trip out that was rather different from the one I had been planning to Wembley.  We bought a fully electric car recently to replace one of our two existing and now aged cars – probably my rusting, but still remarkably effective, hulk of a Saab will go for scrap.  LSW had been using her new electric e-Golf for local trips to and from work but wanted to try out a longer run that would involve practicing charging at a service station.  We chose a visit to the Malvern Spring Festival and charged up successfully at the rather wonderful Gloucester Services, Farm Shop and Kitchen on the way back.

The Festival is a vast exhibition of plants, gardens, art and everything to do with gardening.  It is very popular and there were large crowds.  There is more of a focus on selling garden paraphernalia than I remember there being at the Chelsea Flower Show.  The amount of space available at the Malvern Festival is conducive to that and I enjoyed wandering around the multitude of outlets and tents even though the weather was damp and grey.

Both LSW and I love aspects of gardening.  I tend to focus on the vegetable patch and my allotment while LSW prefers mapping out and planting the flower beds.  However, we didn’t go to the show with any clear purchase plan and only came away with three small perennials and, for me, a £2 pot of recently germinated dill.  Given the vast quantity of stuff that was on sale, we weren’t great customers; just voyeurs!

We had a very pleasant, relaxed morning despite the rather grim weather.  Some of the model gardens were very impressive and, because was the first day of the Festival, the rain hadn’t yet made the car park or walkways too muddy.

It was nice to get out of the drizzle to hear some of the speakers (including James Alexander-Sinclair, Jamie Butterworth and Jo Whiley) in the main marquee.  There, we were also treated to an eclectic fashion exhibition where the designs were based on different plant types and garden themes.  Most of the outfits were rather skimpy and I sympathised with the models and dancers who had to tolerate the cold as well as the weirdness of some of the things they were wearing.  They seemed to enjoy it as much as we did though. 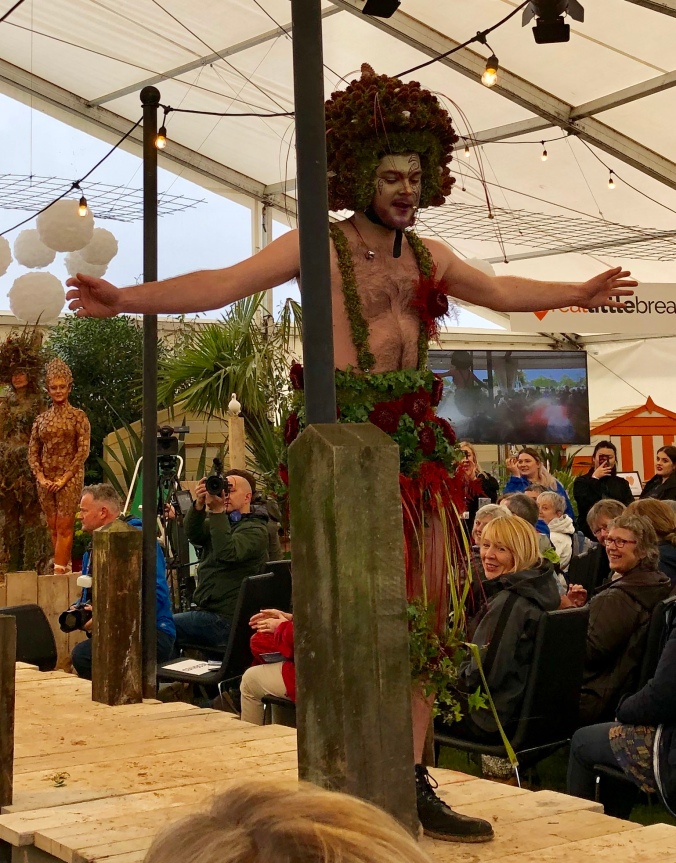 Part Of The ‘Floral Eccentricity’ Show By Sarah Champier. Brrrr!

The What If Garden With More Underdressed Dancers

Fortunately the weather improved after the Malvern excursion.  That gave LSW and I the first opportunities since Easter to sit out in the garden, have a relaxing glass of wine or two, and to survey our past gardening efforts.  We have gradually got increasing control of the small meadow-cum-orchard that adjoins the main garden.  We moved a bench up to the top of it last year.  From there we have a sunny view and can see the gradually increasing diversity of the meadow. 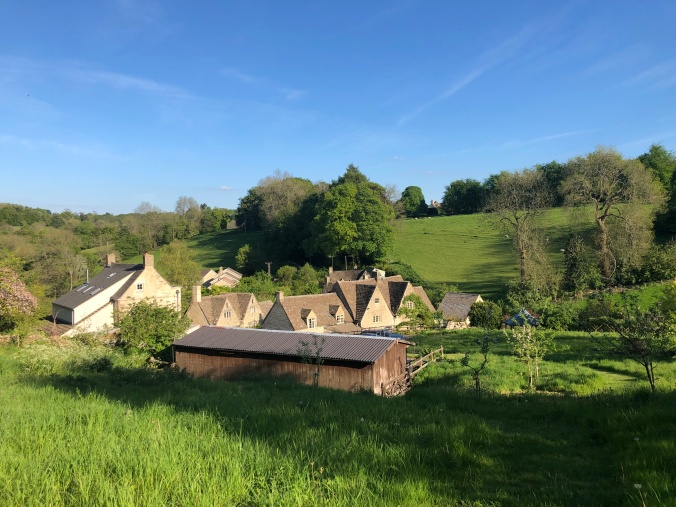 View From The Bench Near The Top Of Our Meadow

Common Blue And Little Copper Butterflies In Our Meadow. A Very Pleasing Addition to Fauna There

I think we will spend more time there in summer evenings this year while planning further garden evolution and pondering the possibility of Wembley next football season.