Long-Suffering Wife (LSW) and I have just returned from a few days in Cologne primarily to see the Christmas markets there.  There is a wide choice of excellent north European Christmas markets.  We chose Cologne due to the convenience of flights Bristol, our closest international airport, advice from the Internet, and glowing reports in Nigel Slater’s Christmas Chronicles (which LSW loves).  Also, I haven’t been to Germany since I worked there briefly in the 70’s and 80’s and it was LSW’s first-ever trip to Germany.

View Of Cologne From The Kohl Triangle Skyscraper

Cologne is far from being the most beautiful city we have visited – second-world war flattening of the city put paid to that.  However, Christmas markets were lovely, the food was very satisfying, the art galleries were excellent and the cathedral is one of the biggest and most imposing I have visited.  The hotel we stayed in was located perfectly just 15 minutes-walk from the touristy bustle but near the interesting Belgian Quarter.  We had a very good break from routine.

There were a number of highlights.  Coming into the city on the airport train, one can’t help but be impressed by the river, rail station and first views of the impressively huge and dark cathedral looming over the city centre.  It was interesting looking back at archive photos of the ruins after the second-world war and the comparison to the buildings today.  The recovery has been remarkable but architectural beauty has largely been sacrificed for speed of redevelopment and functionality.

Apart from the sheer scale of the cathedral, the highlight architecturally was the Kolumba Museum.  This was an unexpected treat.  Not only was the building airy, innovative, minimalistic and inspiring, but the art displayed in this gallery – built on an old, ruined church partly preserved on part of the ground floor – was beautiful and beautifully displayed.  There was actually relatively little on show but the simple juxtaposition of very old (1st to 3rd century) artefacts alongside more modern pieces was thought provoking and some of the older items were just exquisite.  Kolumba alone made our Cologne trip worthwhile.

But there was much more.  The Museum Ludwig was well stocked with art by Picasso, Leger, Braque, Calder, Bacon, Warhol, Lichtenstein and a number of others I recognised plus a number of German artists I didn’t know including Gabriele Munter and Bernard Schultze.  Some of the space was lovely with muted colours and reconstituted, broad parquet floors. 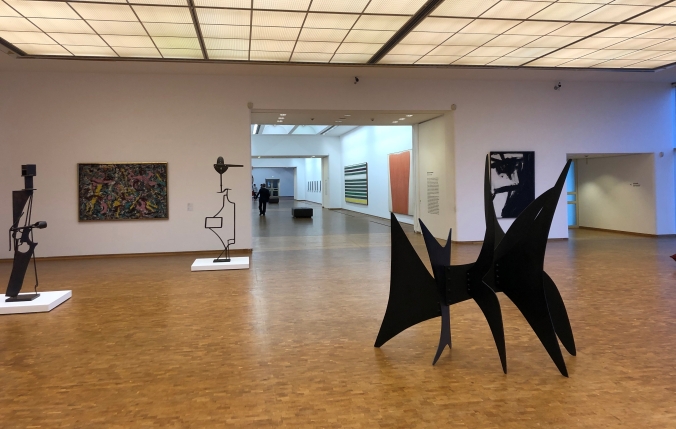 While LSW shopped, I went to Cologne’s main cemetery at Melaten-Friedhof.  I get a strangely relaxed enjoyment from wandering through continental cemeteries.  This one was rather different from those typically found in Mediterranean countries.  Among the mature trees and semi-managed undergrowth, there were rectangular family plots of various sizes and populated with evergreen planting rather than bulky tombs.  On many, rather than pictures of the deceased, there were odd little statues (and labels indicating the maintenance company for the plot; very efficient!)  It was a very peaceful hour despite a short, sharp shower.  I even had the bonus of seeing my first wild red squirrel.

Then it was back to the Christmas markets.  We visited five or six markets over the three days. Each had a slightly different feel or scale.  They were most atmospheric at night when they were simultaneously both garishly and beautifully lit and were busiest, but gluhwein seemed to be offered all day.  We drank the warming, gently alcoholic liquid out of traditional boot-shaped mugs while taking in its smells and that of aniseed, pine and cooked meat from the surrounding wooden hut stalls.

I failed in my lengthy quest to buy a red, spotted toadstool Christmas tree decoration which had become my heart’s desire having spotted one in a closed shop on our first evening in Cologne.  But we did come away with tinsel, a new Christmas tree decoration and a surprisingly large number of lovely, hand-made brushes.  The markets, the food and the drink all lived up to Nigel Slater’s promise.

Cologne Cathedral (Almost Impossible To Fit In A Picture)

Back home now, LSW has used the Christmas momentum our trip generated to get our Christmas tree up and decorated.  Twelve more sleeps to Christmas….