Our last week in Australia was spent exploring the south western corner of Western Australia.  What struck me as we travelled north, south, and east form Perth was that, even though the scale of the landscape is huge, there is considerable diversity in flora and landscape.

To the north are sparse coastlines backed by gigantic dunes.  The eucalyptus gives way to other tree species and then to heath-like scrub.  The towns on the coast such as Lancelin and Cervantes are quietly dedicated to small-scale tourism and crayfishing.

The famous Pinnacles Desert is inland from these fishing towns and was our main target.  This desert in the Nambung National Park is a marvel of calcified tree trunk stumps.  These were once in a forest that was submerged by dunes and now stand in their thousands across a baking desert.  It is possible to walk among them but fortunately, given the heat, there is also a rough car track through the park and we used that.  Once again we admired the way the Australians know how to present their prized landscape wonders.

We spent four days touring the region south of Perth.  We started with a 4 hour drive to Pemberton, broken by a pleasant stop at Bunbury.  As we drove south, the countryside was initially desiccated and there was a good deal of stressed-looking forest.  Later, as we approached Bunbury, the grassland and forest became lusher.  Where there were vast plantations of conifers, we were reminded of our drives around Vancouver a few years back – but now with the temperature gauge turned up! 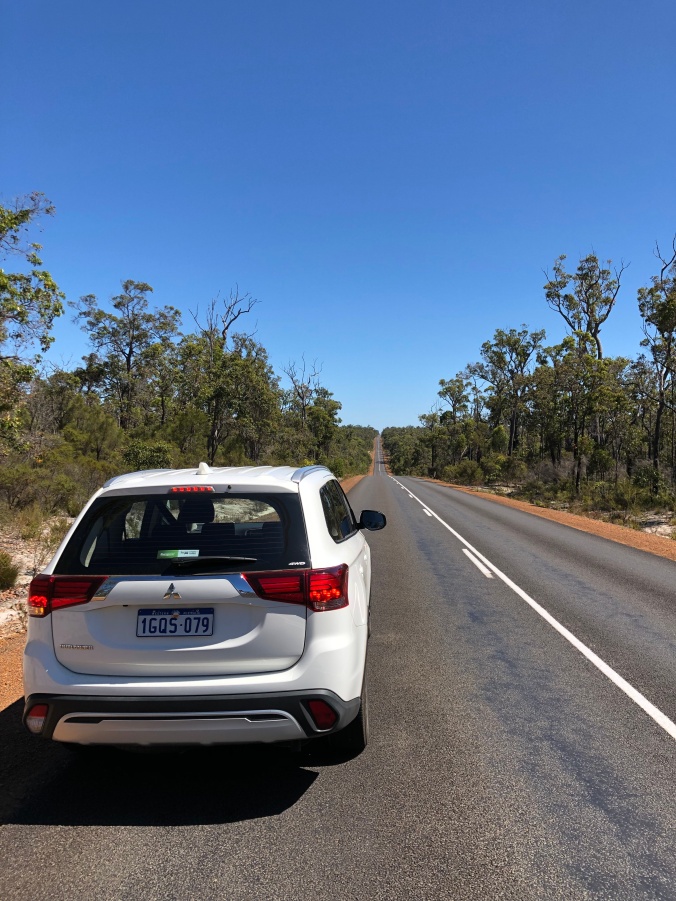 Bunbury itself had some on-trend cafes (e.g. The Townhouse) that echoed Perth’s modern restaurant scene and a lovely rocky coastline was nearby.  There, I was so busy taking a photo of the waves on the basalt pillars that I was too late getting out of the way of an abnormally large wave and got a thorough soaking.  Good job the temperature was in the mid-thirties and I dried out quickly; lesson learnt though.

Pemberton is an unremarkable town surrounded by vast tracts of remarkable Karri eucalyptus forest.  I wanted to visit to recapture the magical feel we got from similar forest we saw 18 months ago west of Melbourne. We weren’t disappointed.

We walked through the forests both in the evening when we arrived and then the next morning and, both times, the slanting light through the trees was gorgeous and the sheer size of the trees was impressive.  My only regret was that I failed to pluck up the courage to climb one of the look-out trees that the fire marshals use to spot fires.  Had the enthusiasm of Youngest Son still been with us, I’m sure we would have all gone up for the tree-top view. 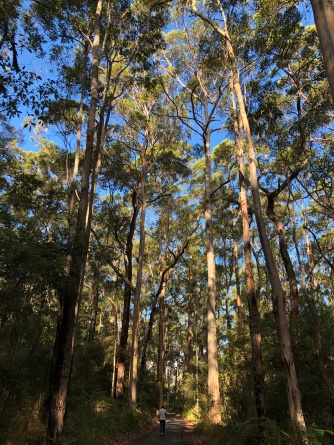 It was during our morning walk through gigantic eucalyptus groves of Beedelup Falls forest that we saw a snake.  Unlike when we were on the Great Ocean Road in 2017, this time, it was Long-Suffering Wife (LSW) who had the closest encounter and was within a couple of yards of its basking spot before it moved.  I think it was a moderately venomous short-tailed snake but it slid away quickly before we got an even closer look (which I really didn’t want!).

From Pemberton we went west and south to Margaret River and Augusta.  Here we chilled out among the wineries and breweries (Xanadu, Watershed and, the best of those we visited, Eagle Bay) and took in views of the surf and dolphins along the dramatic and largely empty coast.  Sugarloaf Rock, Prevelly Bay and Hamelin Bay provided particularly sweeping vistas and the latter had the added attraction of a large number of incredible metre wide sting rays patrolling the shallows. 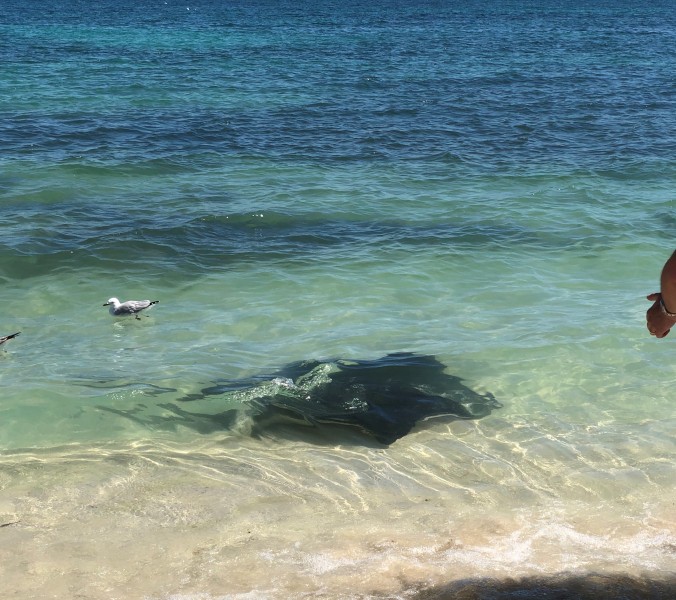 One Of Many Sting Rays In The Shallows Of Hamblin Bay

Panoramic Shot Of Hamelin Bay (Actually, It Makes It Look Smaller Than Reality…)

We also visited one of the large caves just inland.  Fortunately, Long-Suffering Wife (LSW) overcame her fear of enclosed, dark spaces to see all of Lake Cave. This was smaller than the Cango Caves we had seen last year in South Africa, but almost as impressive.

As we travelled around so we passed through little settlements each showing off their specialisms with great pride – Donnybrook is famous for its fruit and had streets lines with lamp posts shaped as apples, Cowaranup has life size models of cows everywhere and another town had a squad of scarecrows on show.  Each community took great pride in their identity.

Further north we visited another of LSW’s old friends – a school friend this time – in Dawesville.  The stories she told of her life since migrating to an Australian farm in the 1970’s were fascinating.  Her very Australian husband was an impressively practical antithesis of my own ability with machines who also had some amazing tales of the sharp end of life and travelling in Australia.

We rounded off that stop over with a wander around Mandurah where a ‘Crabfest’ overlooking a bay bigger than Sydney Harbour, attracted more people than we had seen together in one place throughout our entire trip.  We also diverted to take a walk along Clifton Lake through Tuart eucalyptus woods.  This was interesting for the rare, calcified structures an ancient species of bacteria (thrombolites) produces on the lake floor and also for the chainsaw-like noise the clouds of (non-biting) midges made as we walked through them.  We’d seen a variety of marsupials, birds, reptiles, dolphins and other wildlife on our trip but I didn’t expect to be impressed by midges!

Our final, and probably hottest day, was spent east of Perth.  Here, the trees species were different again.  A whole chook (chicken) lunch at The Feral Brewing Company was followed by a brief, hot trip to the massive and historic Mandaring Weir.  Then there was a final round of drinks at the historically interesting and now rather trendy Guildford Hotel in Guildford.

From there we departed for the airport and left Australia having loved pretty much every minute of our stay there.  We’ll be back one day.