The third city in Australia that we visited, after Sydney and Hobart, was Perth plus its twin, Freemantle, way out on the west coast.  During our five hour flight over the south coast of Australia we got a sense of Australia’s huge scale.  We had previously admired the 9 mile beaches in Tasmania but now we could see we were flying over beaches on the south coast more than 100 miles long.

Long-Suffering Wife (LSW) had booked us into the Alex Hotel in Perth as the base for our stay in Western Australia.  It was excellent – probably the best value hotel I can remember staying in.  It was central, modern, cool, informal and very comfortable.  The friendly and helpful staff, the buffet breakfast and the honour bar systems in the lounge and roof top seating area were very trusting and relaxing. 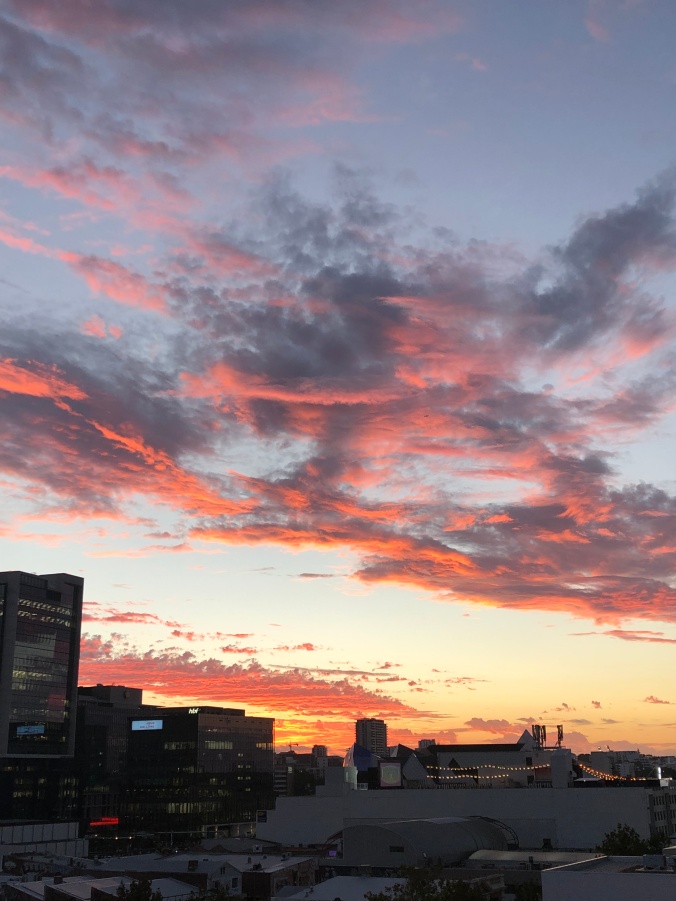 We were initially disappointed that breakfast was included in the room rate since we had been looking forward to finding the best breakfasts Perth could offer.  However, the breakfast was so good – the fig bread was especially tasty and the coffee was predictably excellent – that we indulged every morning.  These substantial breakfasts plus, I think, the 30 degrees of heat outside, meant that we rarely felt like more than light meals for lunch or dinner.  Not that stopped us sampling the excellent food that seems the norm in Australia (for example at NoMafia, Shadow Bar and Gordon Street Garage).

On our first morning LSW and I walked to Kings Park. This is a 1000 acre site overlooking the Swan estuary and the central business district that contains the botanical gardens and a large tract of native bushland.  It was a good introduction to the plants and, especially, the trees of Western Australia and the views were great across brilliantly sunny, clear air. We flagged after a few hours in the heat.  Fortunately, the Swan Brewery, with its view across the shining Perth Water, is adjacent to the park so planning for refreshments was relatively easy!

We strolled around the waterfront which is undergoing a huge transformation.  Everywhere we looked the city seemed bright, shiny and vibrant. 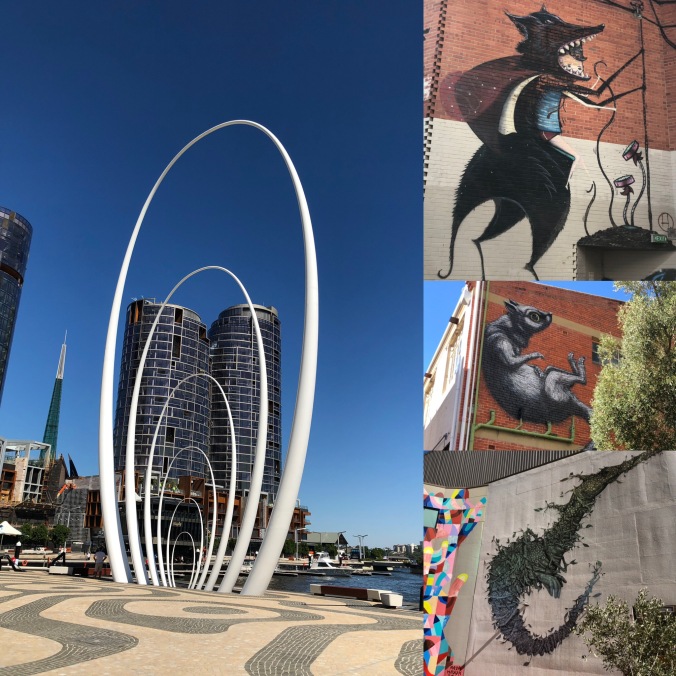 The following day we took a ferry to Freemantle, the port out on the coast at the end of the Swan River.  Again, the city was clean, tidy and looked great in the brilliant sun.  The historical buildings were rather more grouped together than we had seen in Perth’s centre and the strips of late 19th century and early 20th century colonial buildings were busy with independent businesses but well preserved.

On The Way To Freemantle 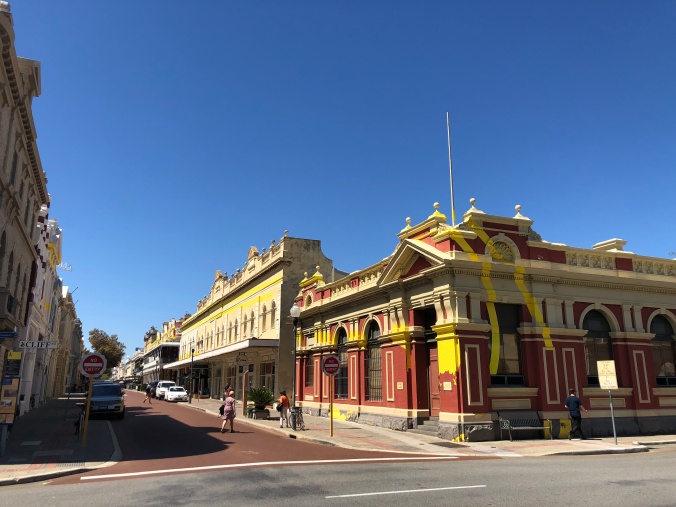 We visited two historical prisons and the Freemantle Shipwrecks Museum and each held our interest for an hour or so.  The Roundhouse opened in January 1831 to hold those convicted of a crime in the settlement and was used until 1886.  We were fortunate enough to be visiting just as a demonstration was taking place of the Freemantle Time Ball and Cannon.  This was used daily until 1937 to indicate the precise time to sailors off the coast so they could navigate successfully through the islands and reefs.  The cannon was a good deal noisier than either LSW or I expected! 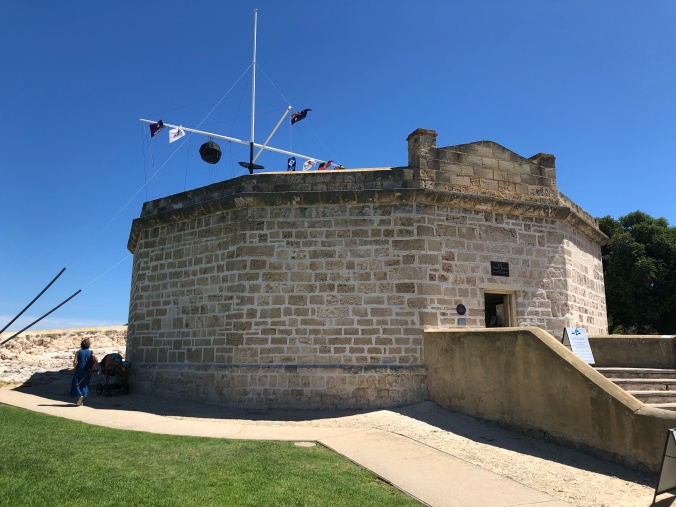 The Freemantle Convict Prison was built in the 1850s by convicts shipped from England and was then used to house them as they continued to be sent to Australia until 1868.  The building was impressive and LSW was rather taken by the standard prison uniform which was rather like some of her own best outfits.  Over 10,000 convicts passed through the prison and helped build the settlement’s infrastructure.  Some convicts served their sentence and went on through various levels of freedom to be successful outside the prison.  Of course, many did not and the exhibition showed how tough conditions were for the convicts, especially those undertaking hard labour in welded-on manacles in over 30 degrees of heat. 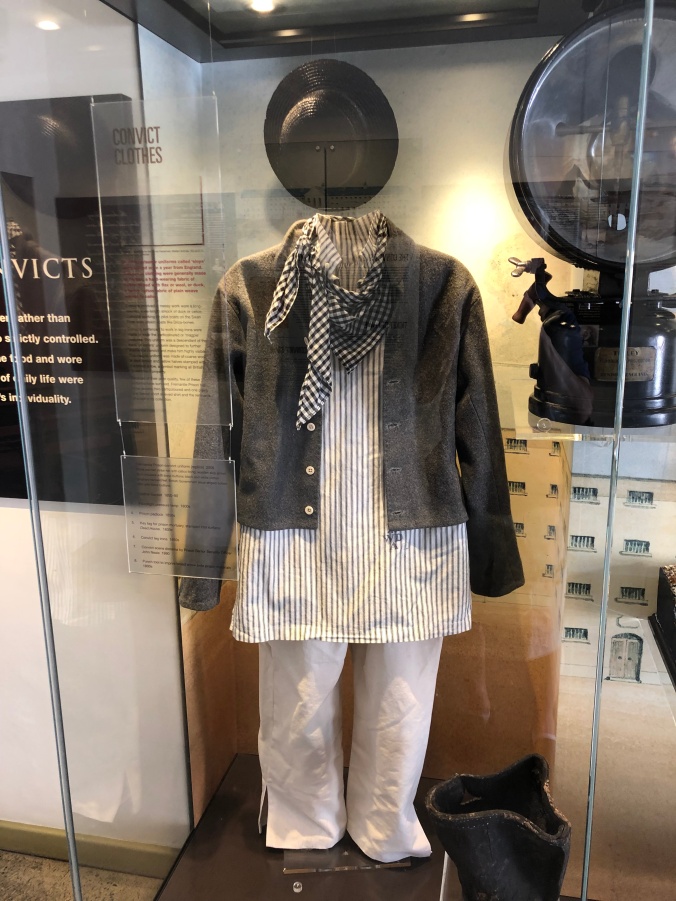 The Shipwreck Museum was stuffed full of information and exhibits and, frankly, we were ready for another nice lunch (which followed very pleasantly at Hush).  I focused on learning about James Stirling who explored the Swan River in 1827 and made the case to the British government for establishment of the Freemantle settlement.  He is an ancestor of LSW’s brother in law so there was an extra twist of interest in the material relating to him in the museum.

Back in Perth, we went to the Institute of Contemporary Arts which, apart from a nice looking café and an interesting exhibition by Cassils (a Canadian performance artist), was rather empty.  I also went to the Art Gallery of Western Australia which was more conventionally full of Australian, Aboriginal and European art.  A collection of European sculptures by Jean Arp, Henry Moore, Auguste Rodin, Lynn Chadwick and Antony Gormley) was impressive.

Our last full day in Perth ended at one of Australia’s iconic beaches: Cottesloe Beach.  Here was more sculpture; this time, a temporary exhibition of international, modern sculpture in a collection called ‘Sculpture By The Sea’.

Sculpture By The Sea, Cottesloe Beach

This exhibition, and Perth’s love of the beach, attracted big crowds.  Navigating these was a novelty given that everywhere else we had been on this trip had been very sparsely populated or entirely empty.  We simply retreated to a bar and watched the lovely sunset.  It was a beautiful way to round off our time in bright, lively and seemingly confident Perth.

We used Perth as a base for travel south, north and east in the south-west corner of Western Australia.  I’ll cover my thoughts on some of those journeys in the next post.