Since my last post, Storm Fionn and then a series of grey, wet days have forced the early signs of Spring into something of a retreat. The frozen lake I passed during one of my daily walks last week was a beautiful criss-cross of ice patterns indicating that Winter is not done yet. 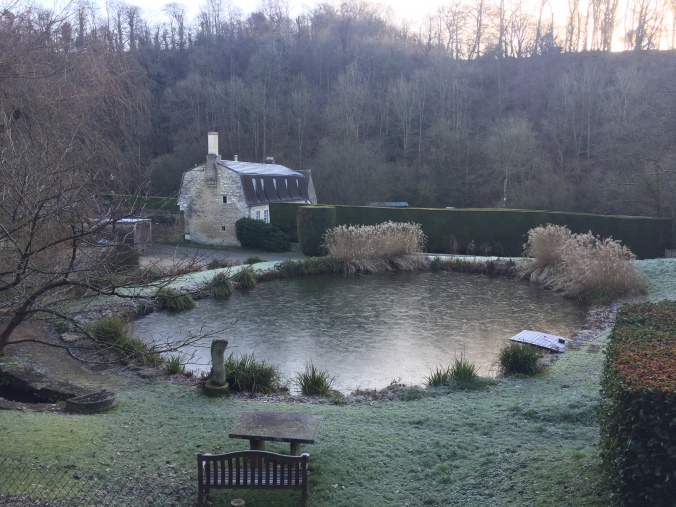 On the other hand, I saw ducklings on a larger lake a few days later – surely too early! Climate Change or Climate Disruption – whatever we want to call it – is creating some strange and unexpected juxtapositions. The ducks are as good an indicator as any that, for all the brief periods of the extremes of wind, ice and snow recently, we have just experienced one of the warmest years ever.

I’m still struggling a bit with a stiff back and neck (which wasn’t helped by my comical looking fall in the ice a few weeks ago). I have decided to try some new treatment.

Years ago I received treatment from a Physiotherapist for a locked up back and still do the exercises recommended by her (admittedly, rather intermittently). Then, when we were in Australia last Autumn, Youngest Son’s girlfriend – a trained Osteopath – gave me a thorough and very professional osteopathy session. While she demonstrated considerable bravery in offering the session, I showed cowardice at the other end of the scale by eschewing the more drastic manipulations she recommended. Nonetheless, there was some welcome improvement in my movement.

I have therefore sought out some similar treatment locally. Despite the rural nature of where we live, there are a surprisingly wide range of options and number of places to try; health is, of course, a boom industry in an ageing population. I ended up opting for a well-being centre and practitioner that I can walk to and who was recommended by a friend.

It turned out that the specialist is a Chiropractor. I’ve not had one of those before. As I related my medical history, he described the treatments offered by Physiotherapists somewhat disparagingly – there seems to be little love lost between the various physical therapy disciplines – and explained how his treatment would be different from that Osteopaths provide.

I’ve only had two sessions so far so the jury is out on the degree of success the treatment is having. A back and neck problem I have had off and on for months is hardly going to be sorted out in a week. However, I’m sceptical so far.

The type of chiropractic therapy I am undergoing is a ‘brand’ called McTimoney. Its very gentle and largely involves little slaps, flicks, rubs and pokes that are designed to invoke natural body reflexes in a way that realigns things that have got out of sync. That it doesn’t involve much big clicking or crunching of bones and ligaments is good for a coward like me but I wonder if I’m going to see much improvement without more drastic action.

The other concern is that both the previous sessions physiotherapy and osteopathic treatment I’ve had concluded with me getting exercises to do that helped me feel more in control. My new Chiropractor has yet to offer that. It’s not that I want more exercises to do – I don’t do the ones I have already been given regularly enough to justify getting hold of more – but knowing I should do them puts the onus on me rather than simply trying to outsource the problem.

I have a couple of sessions booked so will wait and see……. at least, now I’m retired, I can have the sessions without the hassle of having to book time out of the office or around meetings.