Youngest Son (YS) has just returned from Brisbane, Australia with his girlfriend for three weeks visiting their respective families. It’s lovely to see them again and to have YS stay with us, off and on, for a couple of weeks in between his trips to London, Bristol and Belfast.

The weather has been a bit of a shock for them both though. They swapped temperatures of over 30° in Brisbane for what was, on Tuesday night, -13° and instead of Australian sunshine they got snow, ice then steady rain.

We don’t seem to have had proper snow for a few years and, initially, it is always welcome. It quietens everything and makes even messy areas – like the current building and landscaping works in our garden – look pretty.

YS managed to get his drone up (an essential part of his equipment for his business at Cactus Juice Cinematography) and took some video and pictures. Our hamlet was a picturesque winter scene with a steady fall of snow, whitened trees and happy tobogganers in the field opposite our house. 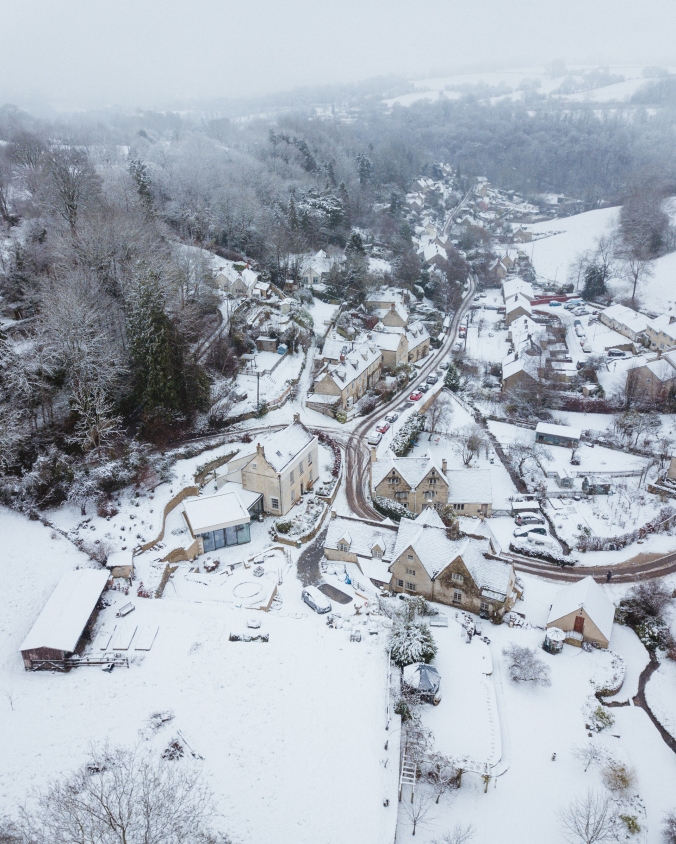 Drone View of Our Hamlet in Winter

But then, after the initial impact, snow becomes a bit annoying. In part this was because YS had to drive his girlfriend to Bristol so that she could catch an onward flight to Northern Ireland. That was a challenge given the steep roads around us but the village ‘Snow Warden’ had been out gritting and she made it. Others haven’t been so lucky and there have been a few accidents in the area. 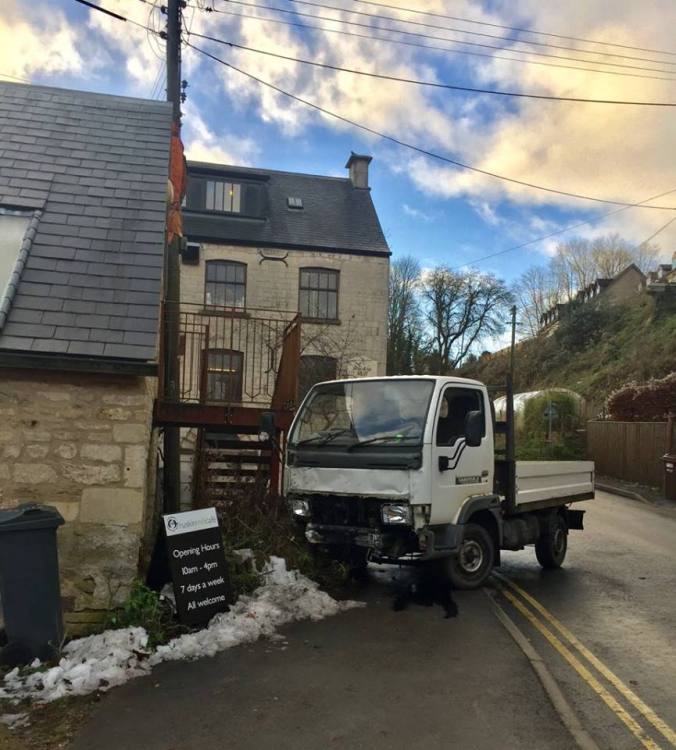 A Victim of Black Ice

Back at home, the snow, and its subsequent freezing then melting, highlighted a couple of issues with unplanned permeability of our house. The weight of the snow has also played havoc with the guttering on the shed so the raised vegetable beds are now raised above a big puddle.

Nonetheless, on balance, I think snow is a good thing. It feels like an essential characteristic of winter and a small rebellion against the inevitability of climate change and global warming. Some more snow around Christmas with cold clear days would be ideal (provided it doesn’t mess with the football fixtures!) 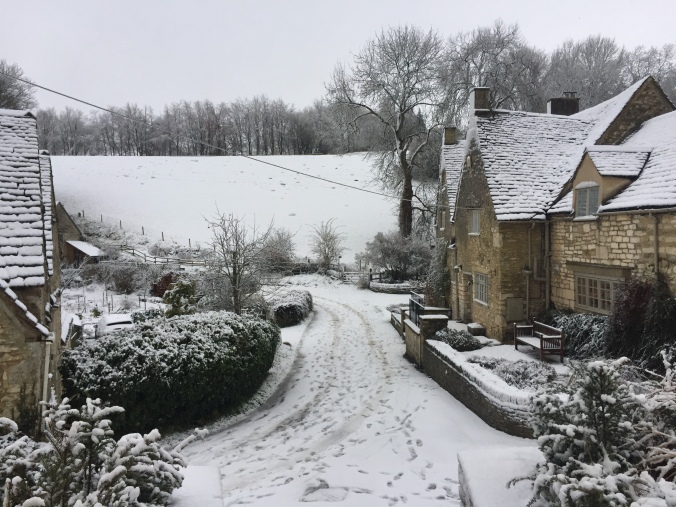 Winter View From Our House 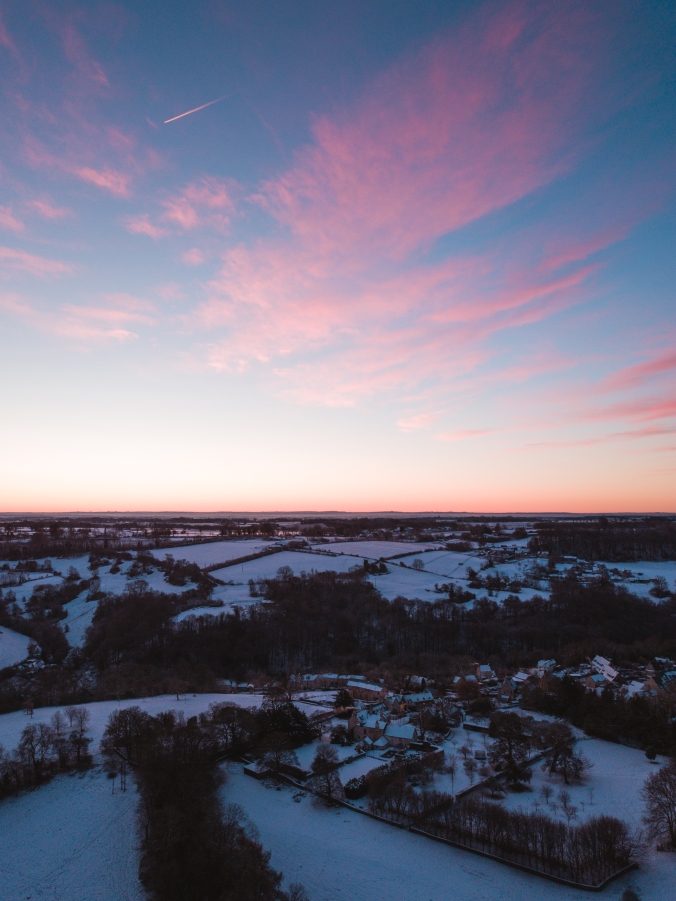 Drone View of Sunrise Near Our House

One other impact of the snow, ice and then rain is that it has given me no excuse not to progress painting of our recently upgraded TV room. I can’t remember the last time I did any decorating but it was decades ago. I’m re-learning – the hard way – the need to sequence the process correctly. For example, having carefully put down protective masking tape on the edges to be painted, scraping it off accidentally while sanding down created irritating re-work. But progress is being made and I like the deep blue colour LSW has chosen – a significant departure from her white and grey norm. 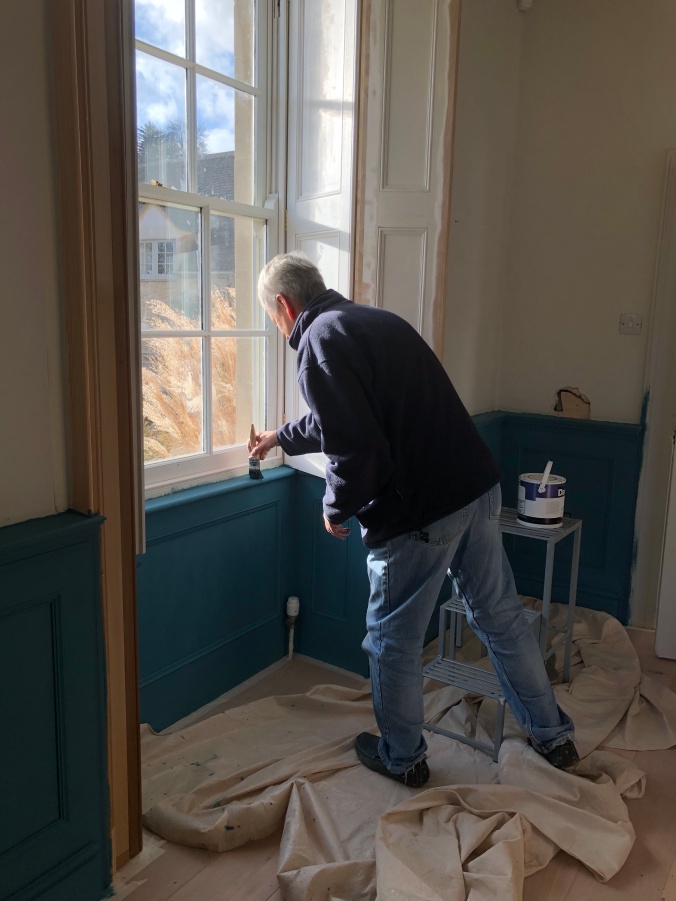 A Very Rare Sight of Me Decorating (Applying Undercoat Slowly)