One of the things I have missed most during the coronavirus pandemic has been London and one of the things I enjoyed most during my London visits was going to the art and topic-based exhibitions curated there.  Last week, at last, Long-Suffering Wife (LSW) visited London again for the first time since the first pandemic lockdown.  We both loved the blip out of our relatively rural semi isolation (notwithstanding our trips to Belfast and Edinburgh in the last year).

During the trip, I saw two art exhibitions: one a life retrospective of Paula Rego (a contemporary Portuguese artist) at Tate Britain and the other a similar retrospective of Jean Dubuffet’s work at the Barbican (it’s now finished).  It was a welcome cultural binge.

The fundamental reason for our London trip was just to break up our routine for a couple of days.  Also, it was an opportunity to catch up with Middle Son (MS) and his partner in their new flat in Haggerston.  They recently moved out of their stop-gap rental of our flat in the Barbican, so that was available to us.  Although the flat is now bare and looking a little tired, it remains a very comfortable, central and convenient bolt hole for this sort of visit.  We are very lucky to still have it until we finally sell this retirement nest egg, probably, next year.

After driving up in our e-car (which in combination with the flat made the trip itself near free of incremental cost), the weather was kind enough to enable us to make a lengthy walk along the Thames Embankment to Tate Britain.

There, the exhibition of Paula Rego’s work was substantial and comprehensive.  What I love about these elite retrospective exhibitions is that one can trace the development of the artists thinking over time while seeing the consistent themes beneath and between the changes in technique and subject matter.  Much of her work depicted the sexuality, strength and resilience of women in hardship; the Dog Women series was an example.

I enjoyed the exhibition a lot but suspect that was as much a function of the novelty of being in a classy exhibition as it was the art.

The exhibition of French contemporary artist Jean Dubuffet’s work was also chronologically ordered to enable understanding of development of his ideas.  The work on show was more varied than that of Rego and I really only liked some of the series of work.  Again, though, some aspects of his style were satisfyingly constant – not least the strange, bloated heads on the figures in many of the works and the use of natural materials with unusual paint type combinations.

The Barbican presented the works very nicely.  Some of the more colourful pieces were lit so they appeared luminous and the pandemic has made London art exhibitions less crowded than they were so there was plenty of room to view everything.

However, although the Barbican tried, I didn’t really understand the Art Brut movement that Dubuffet first named and for which he was a lead exponent of through much of his career.  Maybe the video at the end of the exhibition that explained his counter-cultural aims would have been better placed at the start of the exhibition alongside Dubuffet’s quote (which sounded about right):

“Art should always make you laugh a little and fear a little.  Anything but bore”

The weather was too nice to be indoors soaking up art exhibitions for too long.  Apart from the initial riverside walk to Tate Britain, LSW and I also tried out the new Uber riverboat service to get us back to our flat.  It was refreshing and it’s always good to see London from the perspective of the river.

We also went to the Queen Elizabeth Olympic Park in East London.  We followed a newly signposted art trail (‘The Line’) south from the Park down the tangle of man-made and natural waterways leading back to the Thames.

The area is, of course, changed out of all recognition since we lived in Bow in the 1980s.  Everywhere there are new complexes of flats but, in between, there are signs that the environment and leisure activity is being properly considered.  Certainly, the Olympic Park itself is a lot less bleak than when I last visited.  Now the planting and trees are maturing along the walkways.  I’m looking forward to visiting again and doing some more strolling around the Park and along the nearby waterways.

LSW and I ate out at Smokestak which is an old haunt of mine and ours.  That was good but better was the dinner we had with MS and his partner at Bistrotheque.  East London seems to continue to be almost as well populated with good restaurants and cafes as ever despite the pandemic and the reduced customer numbers.  Drinking holes on the way to Bistrotheque at Signature Brew and, on the way back, at Ombra were conspicuously quiet.  But that just meant that we could get prime tables and attentive service; very nice!

I have a couple of long and often postponed gigs to see in September and October in London and, at some point, LSW and I will need to decorate the Barbican flat to make it ready for sale.  Those should all be opportunities to spend more time in London – even if these visits become swansongs – to take in more of the excellent exhibitions and art and architecture trails there.

Meanwhile there is the significant and emotional matter of my Mum’s funeral.  Thankfully she died peacefully.  After a year or so in which she had, regretfully, to come to terms with being in a care home (a very good one as it turned out), in which she contracted Covid, and then in which she gradually faded, her passing was no shock.  Nonetheless, Mum’s funeral will be a sad closing of a long and fruitful life.  There will be tears and then we are compelled to move on with our memories.

While Long-Suffering Wife (LSW) and I were in Australia, we met up with three of her long-standing friends: a school friend in Perth, a college friend in Hobart and a more recent friend in Sydney.  Each reunion was refreshing.

LSW has been continuing this sustenance of her friend network since our return.  Three friends who we knew when we lived in Kew near London have dropped in to see us.  She has also been with other friends from Kew to the People’s Vote March in London and to Bristol to see another long-term acquaintance from work.  It is time for me to match her relationship maintenance!  I have the time now I am retired, and the only issue is fitting in with the diaries of my old friends who are still working.

For many years, a small group of friends who I got to know shortly after I first moved to London over 40 years ago have been getting together on a regular basis.  For the last few years we have been meeting up every few months in a restaurant chosen alphabetically based on country of cuisine.  We are up to P for Portugal.  I travelled up to London last week for the latest instalment of catching up with personal developments, railing against the inequities of the world and solving (in theory) a few current newsworthy issues.  It was fun and informative as usual, and an excellent excuse to spend time in London.

Also, I have also managed to get together with two friends from my college days.  My goodness; now we are talking about 45 years ago!  We have stayed in touch intermittently since then.  Some years we have been completely out of contact with each other and then we have had periods when we have been close.  One of these friends was my Best Man (BM) at my wedding and, as those who have read earlier posts will know, I see him off and on at his house near Cambridge.  The other now lives with his wife in Oxford and that is where all three of us met.

I have only been to Oxford a few times in recent years.  Then, the visits have been mainly to the outskirts to see Forest Green Rovers Football Club play Oxford United or to drop off or pick up Youngest Son from Oxford Brookes University.  This latest visit allowed me an almost full day wandering the city alone and then further sightseeing with my mates the next day. It’s a lovely city.

Upon my arrival, the weather was cold and I decided to go for a brisk walk to warm up.  I ended up walking a few miles up and down the Oxford canal.  This is a much scruffier walk compared to that along the Thames which we did together the following day.  Along the canal are mainly dilapidated barges.  Some sustain human life but almost all are covered in detritus and the romanticism of living independently on water looked rather battered.  The wildlife was plentiful though and the oblique view of the city through small canal-side workshops and back gardens was interesting.

I went to an exhibition of Jeff Koons’ work at the Ashmolean Museum and continued to warm up.  I am not sure I like Koons’ work but it is certainly striking.  Regardless of whether the pastiche or banality is deliberate, his work isn’t the sort of thing I would want in my home.  However, the exhibition explanations of the pieces on show, and a short video interview with the artist, helped me understand at least some of what he is trying to achieve.

Pieces By Jeff Koons At The Ashmolean Museum (Balloon Venus, Ushering In Banality, Rabbit And Ballerinas)

Much of the rest of the Ashmolean Museum – apparently the world’s oldest museum – is rather like a stately home with sumptuous furniture, display cases and huge paintings.  I didn’t explore all of it but wandered a little aimlessly though impressive collections of porcelain, musical instruments, and modern art by a number of artists I admire such as Bacon, Kandinsky, Matisse and Hepworth.

I dwelt only in two galleries.  The first held a small but lovely, lush collection of 12th and 13th century Italian art which had some unusual pictures (one apparently depicting God himself and another showing a time lapse series of poses following the crucifixion).  The second covered the Pre-Raphaelites and included accounts of some of the salacious and scandalous relationships between the artists and their partners.  I saved the rest of the museum for another visit. 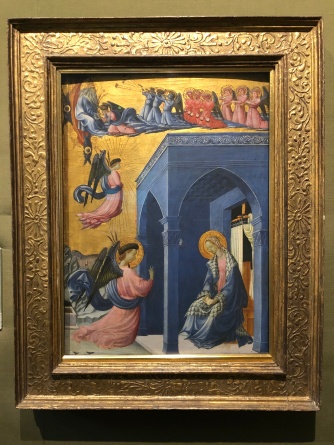 We ate well in Oxford but I walked many miles to work off the calories.  The sun came out for our walk around the north end of the city (including a brief stop at the remarkable and rather thrillingly cluttered Pitt Rivers Museum at adjoining the back of the Natural History Museum) and then along the Thames to a pub called The Perch.  It was great to get together with these university alumni, together for the first time in years, and to catch up with our ups and downs (in my case, thankfully, almost all ups).

Walking By The Thames At Oxford

Today LSW and I are off to Cheltenham to see some more old friends.  How personable I have become since retiring!