On our way to Australia, we stopped over for a couple of days with Long-Suffering Wife’s (LSW’s) brother in Doha, Qatar. He has been in the Middle East for many years. Currently, he is working on the design and build of one of the new stadia for the 2022 Football World Cup.

It was great to see him in what has become his new natural habitat. Despite his work pressures, he kindly accommodated us and introduced us to some of the night life. This included the lively and labyrinthine Souk Waqif and some of the numerous hotels that cater for business expense accounts, ex-pats and the indigenous rich. LSW loved the valet parking but the highlight for us both was dinner at an Iranian restaurant called Parisa in Souk Waqif. The food was substantial and flavoursome and the decor was simply astonishing. 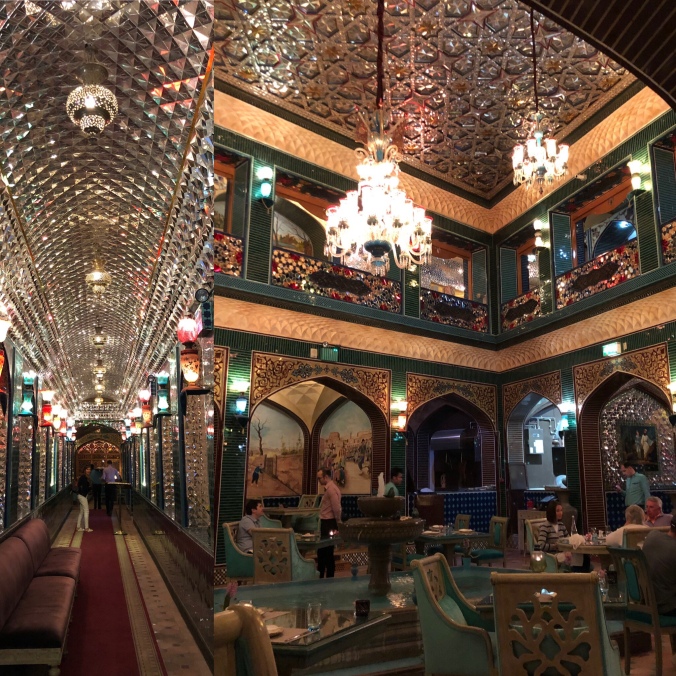 Qatar is, in most ways, a very young country. For centuries it relied on fishing and pearl diving. It’s incredibly rapid growth has just been since the discovery of oil in the mid-20th century. Now it is vastly wealthy with investments all over the world and massive infrastructure development at home.

Construction seemed to be everywhere although there was a feeling that some had slowed recently due to political conflicts between Qatar and some of its neighbours.

Along the thoroughfares, new landscaping (with expensive-looking paving, date palms, colourful petunias and leaky pipe watering systems) is joining up buildings that are springing up from bare desert. Clearly there has been a massive amount of money and architectural imagination at play. The architects have had a huge amount of fun with everything from the buildings to the lamp-posts.

Part Of The Central Business District (CBD) (Including The ‘Condom Tower’)

The most impressive buildings I saw were the Museum of Islamic Art and the Jean Nouvel Museum. The latter is not yet complete, and was hard to get close, but it looks wonderful already.

Jean Nouvel Museum From The Corniche

Also, we were impressed by the Msheireb Downtown Area. This is a swathe of Doha that was part of the mid-20th century expansion, that then fell into disrepair and which has recently been cleared. It is being replaced by an innovative, relatively low rise, sustainable development. This uses shade and the wind for cooling and removes cars to underground passages. The area re-built so far feels accessible, fresh and calming.

Not all the new architecture works for me. Some of the buildings are bizarre or just ugly to my eyes. The blingy palaces and residential blocks on the artificial islands called The Pearl were particularly soulless and disappointing (although the gin palaces in the nearby marinas were as impressive as expected).

My impressions here were not helped by the piped muzak – truly ghastly – or that I temporarily thought I had lost my wallet. Fortunately I had simply left it at LSW’s brother’s house so my doom and gloom contingency planning was quickly made redundant. 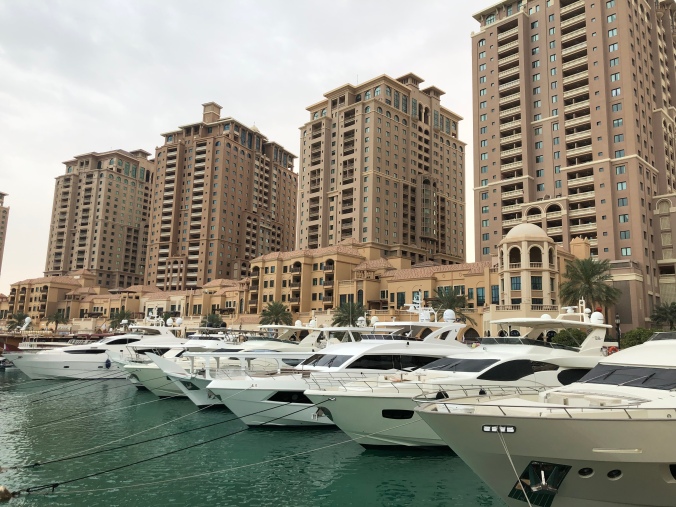 The Pearl Tower Blocks And Marina

Qatar is fiercely proud of its heritage and culture. There are a number of cultural centres. One we visited was the Msheireb Enrichment Centre, on a huge barge, which provided some well presented, fascinating insights. The exhibits posed provocative questions about the role of social media and women, and about sustainability and climate change (surprising given the country’s dependence on oil/gas revenue and the car). It also explained the objectives of the Msheireb Downtown Project.

As part of that project, four historic buildings have been restored/re-built and now house interesting exhibitions on life in pre-modern Qatar, on the role of oil in the country’s development, and on slavery. The buildings were peaceful and cool in every sense. 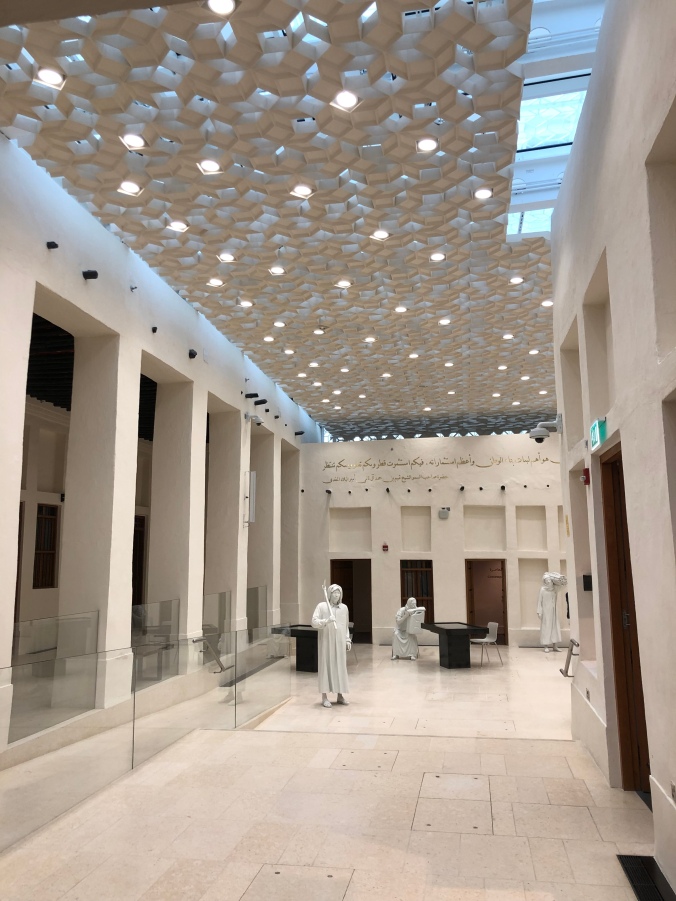 LSW and I visited the Mathaf Arab Museum of Modern Art several miles to the west of Doha centre. The trip was worthwhile despite none of the artists being known to us. The overall impression I got was that the desert light prompts artists to use a more colourful palette than we often see in the West. 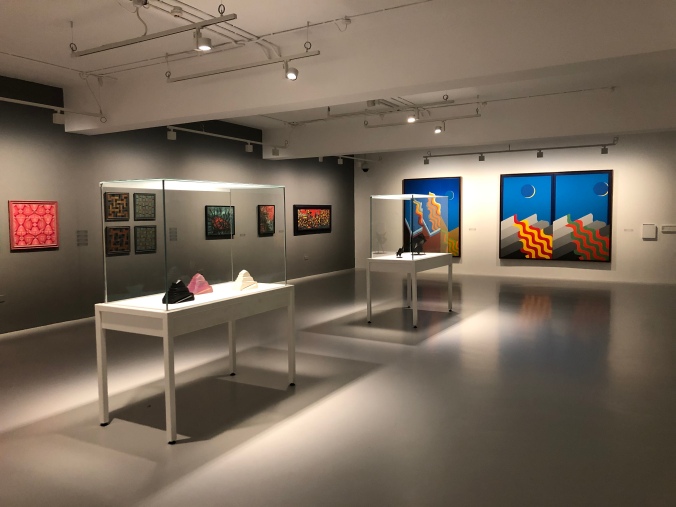 One Of The Rooms At Mathaf Arab Museum Of Modern Art

However, the centrepiece of the Qatari focus on culture is the Museum of Islamic Art. We visited twice (all the museums are free), the second time to focus on the threat to Syrian monuments and cultural artefacts posed by the war there.

A little like the Kolumba Museum in Cologne that we visited late last year, the emphasis is on quality not quantity. The pieces on show are terrific, the lighting is atmospheric and the interior architecture is inspiring. We loved it.

Inside One Of The Museum of Islamic Art Exhibition Rooms 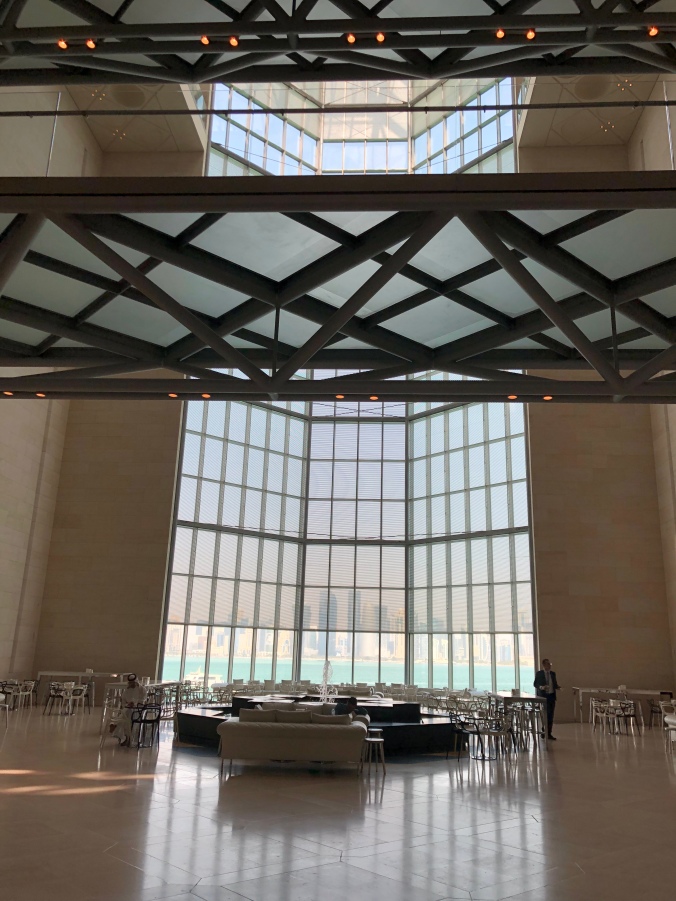 Our stopover in Doha was a huge success. It was made special by being able to meet up with LSW’s brother but we may well visit again on our way east in the future even if, by then, his work in Qatar is done.

Now on to Sydney.

One thought on “Qatar: Architects’ Playground”