Those of you following this blog for a while will know that I have been painting the woodwork in our ‘TV Room’ – new shutters, skirting and panelling and the old doors – for the last 8 months.  This week, I finally finished! 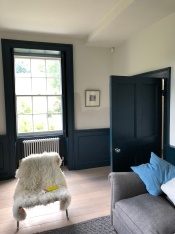 Long-Suffering Wife (LSW) remains astonished at how long I have taken over this but at least she hasn’t changed her mind about the dark blue colour during the protracted execution and she likes the result.  The parts I did towards the end of the exercise are better than the early efforts but it looks alright if you don’t look too closely.  We now have to paint the walls.  LSW is planning to impress me up by doing those in a matter of a few days.  Maybe hiring a professional is a better idea; we’ll see.

Of course, the primary reason why it took so long to complete this apparently simple painting task, apart from my inexperience, was my reluctance to devote more than 1-2 hours a day to the (admittedly intermittent) work.  Although I’m still a bit frustrated by the patchiness of the end product, I did enjoy the work overall.  I especially liked that I could paint to the rhythm of some of my CDs.  I’ve always wanted a job where I could listen to my favourite music at the same time as working, and retirement has enabled that!

Now I have finished, I have to find a productive way of utilising the hours per week that are freed up.  No problem; there are plenty of competing options and in any case there are lots of events already in the diary over the next couple months.

For example, the football season has re-started.  I plan to attend several Forest Green Rovers (FGR) games, both home and away, in the next few months.  While I attended the Cambridge Folk Festival, which I talked about in my last blog post, FGR enhanced my enjoyment by winning their first game.  Somehow, the music seemed to sound a lot better once I knew FGR had secured three points!

Since then I have seen three games and we remain unbeaten; a very promising start.  I especially enjoyed our win at Swindon who have become local rivals as we have risen and they have fallen (they were in the Premier League just 25 years ago).  I enjoyed joining in on the mischievous chants: ‘Premier League to village team/Forest Green’ and ‘Your ground’s too big for you’; it is, as the picture below shows.

Between the football commitments, LSWs work and the rush to complete the TV Room paintwork (so I could show it off to weekend visitors from London and then my parents when they visited us), LSW and I have resumed our ‘days out’.

We really enjoyed a trip to East Somerset.  We went primarily to see the Alexander Calder exhibition at Hauser & Wirth in Somerset.  This was notable for containing a large number of personal, functional items designed and made by Calder alongside a splendid sample of his sculpture and mobiles.  It was an excellent exhibition and a visit to Hauser & Wirth, including the adjoining garden, is always a treat. 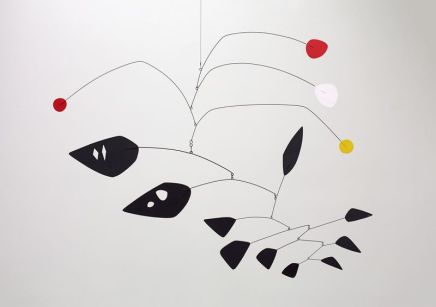 Following a very good lunch at the light and airy Chapel in Bruton, the sun came out and we paid an impromptu visit to Iford Manor Garden.  This was a rather unexpected joy. It was an intimate, Italianate garden full of 100 year old mock-Italian buildings adorned with original, imported Italian sculpture and friezes.  It adjoined an archetypally English river scene and old, golden manor buildings, and looked wonderful in the sun.

More day trips like this – as well as longer excursions once LSW’s work is on pause – are being planned to fill my retirement itinerary.

One thought on “Finished At Last!”