As I write this, I am travelling up to London for the second time in a week; I still look forward to my regular ‘fix’ of London life.  Today, I’m using the excuse of the need to visit my long-term dentist for a check-up.  The previous visit was primarily to enable Long-Suffering Wife (LSW) and I to meet with Eldest Son’s (ES’s) new girlfriend for the first time.  She was lovely and we all had a splendid evening at one of our favourite restaurants: Morito in Hackney Road.

I also managed to squeeze in a rather drunken lunch and impromptu darts match with an old mate of mine from my Accenture days – getting on for a decade ago now.  Meanwhile, LSW saw an art exhibition and we followed up next day with a bit more culture.  First LSW and I saw the Picasso exhibition at Tate Modern and then we went to Hampstead to visit 2 Willow Road, a modernist house designed and previously owned by architect, Erno Goldfinger.

The Picasso exhibition was unusual in that it focused on just one year of his life.  That was 1932 during which he conducted a secret affair with a young woman who he painted almost daily.  It was interesting to hear how the affair came to light – including to his wife – only at a retrospective exhibition of his work which included several paintings of his mistress.  For someone so apparently confident in his ability, it was also fascinating to hear how he curated the 1932 retrospective in a way to try to reassert his continuing relevance following the success of his earlier work.

The visit to 2 Willow Road was also eye opening.  It’s an early reinforced concrete building built in 1939 by and for the architect who later became (in)famous for some of the tallest reinforced concrete residential tower blocks in London.  It was given to the National Trust after his death and has been largely untouched since then.  The art he collected – including pieces by Henry Moore, Bridget Riley, Max Ernst and Delaunay – is still on show and we got a real feeling for the way he lived and entertained.

Most interesting were the similarities between the features (such as the en suite sinks), inter-room connectivity (facilitated by removable and sliding doors) and huge windows in 2 Willow Road, and the nature of our previous family home built in Minchinhampton, Gloucestershire almost 20 years later.  Clearly, unbeknownst to us, the architect who designed our house and the one we used to develop it were familiar with Erno Goldfinger.  Like 2 Willow Road, I suspect, our previous house was rather ugly to look at, but lovely to live in.

Now we have moved on to an old farm house with a Georgian façade.  However, the extension LSW helped to design a few years ago offers plenty of space and light so we have retained some of the best aspects of our house in Minchinhampton.  The combination of old house and modern extension feels right and our garden – recently walled and extended to take over half of the previous car parking space – is more manageable than that we had before.  With the additional time I now have, and LSW’s increased interest in gardening (plus 4 hours of paid help most weeks), we are gradually getting control of the garden.  Once I finish the endless painting of the TV room I will have even more time to relax in it! 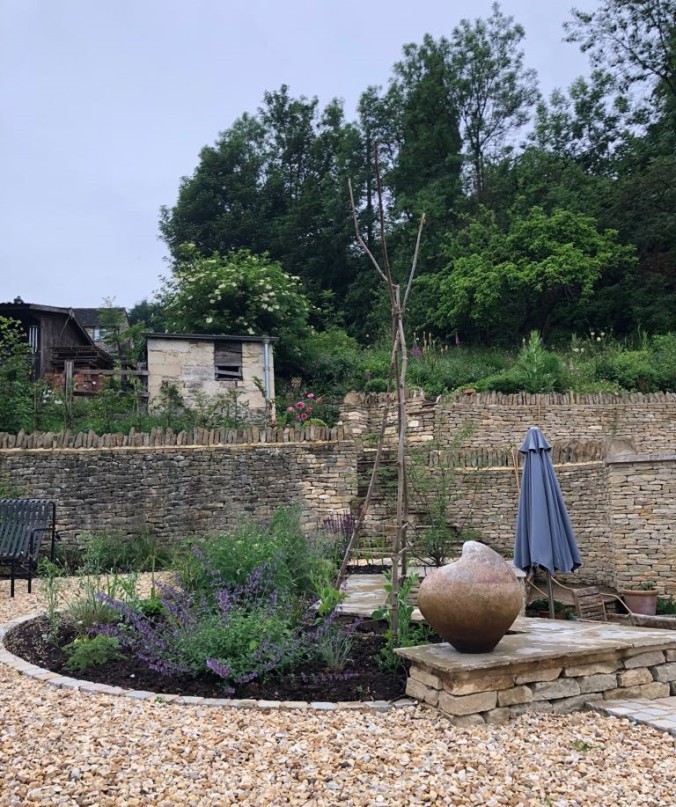 Part of the New Garden Area At Our House