Very nearly 10 years ago today I went to a gig at Kings College London to see a Scottish miserabilist singer called Malcolm Middleton. It was the first gig I had been to for a very long time but it was terrific and it re-kindled my excitement for live music.

Since then I have been to see over 300 gigs in London (I know because I’m the sort of bloke who keeps records of these things). Indeed I have seen Malcolm Middleton another 4 times since that wonderful evening 10 years ago.

I love the music itself (usually), the intimacy of the smaller venues and the anonymity. I’ve turned up after work in a suit to several of these gigs and no-one cares about that, or my grey hair, or that I am usually 2-3 times older than the fellow audience members.

Now I am retired I have more time to attend music events. However, I have been concerned that, having had to move out of London, I won’t find the opportunities to do so and will miss the variety and quality on offer in London.

In the last week or so, I have started to explore local venues with LSW and I’m much encouraged.

There is certainly variety. LSW and I have been to a local village festival featuring bands adept at 70’s and 80’s cover versions. That was great fun, though the pub car park we were standing in got a bit cold after a while – it’s an English summer after all!

We then went to a fundraiser in aid of a local church roof repair with experienced opera singers, young musicians just starting out and, believe it or not, the Stroud Ukelele Band. Fun for a good cause…. 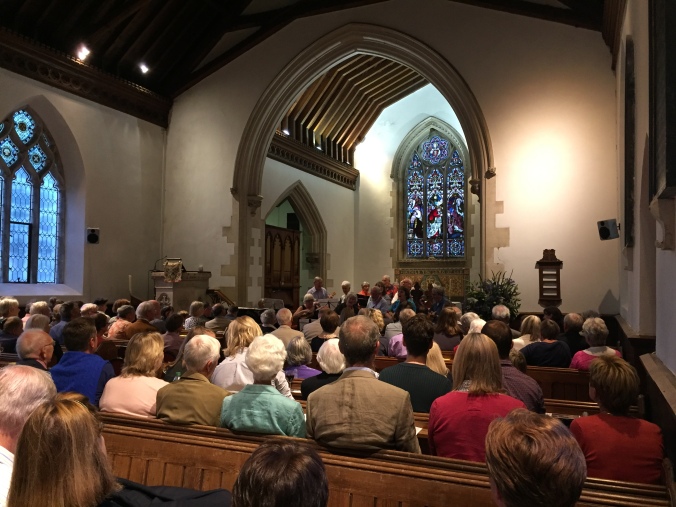 Then, after a few quality checks on Spotify, LSW was persuaded to come with me to see Sam Brookes at The Prince Albert pub a few miles from our home. Co-incidentally, he was on a bill for a gig I went to in London over 4 years ago. He was very good and I am sure I will be a regular attendee at this venue, alongside its very mixed audience where, as you will see int he picture, I will no longer be the oldest.

Sam Brookes at the Prince Albert

Finally I am already now a regular Sunday afternoon attendee at The Vault which is just a pleasant 30 minute walk away from us. Here the well named ‘Super Chilled Sundays’ comprise of a beer or two, perusal of the Sunday paper sports pages and magazines, completion of the Guardian Quick Crossword with LSW, and local musicians doing their stuff to create a comfortable ambience. It’s all very relaxing and a wonderful change from having to pack up and leave for London on a Sunday afternoon as I had to do until retirement.

The Honeymoon Trio at The Vault

My musical investigations will continue deeper into our local town of Stroud – I have high hopes for a new venue opening there – and into Bristol. Plans are being made and tickets being bought for both. There will be more on my revised musical journey in due course.