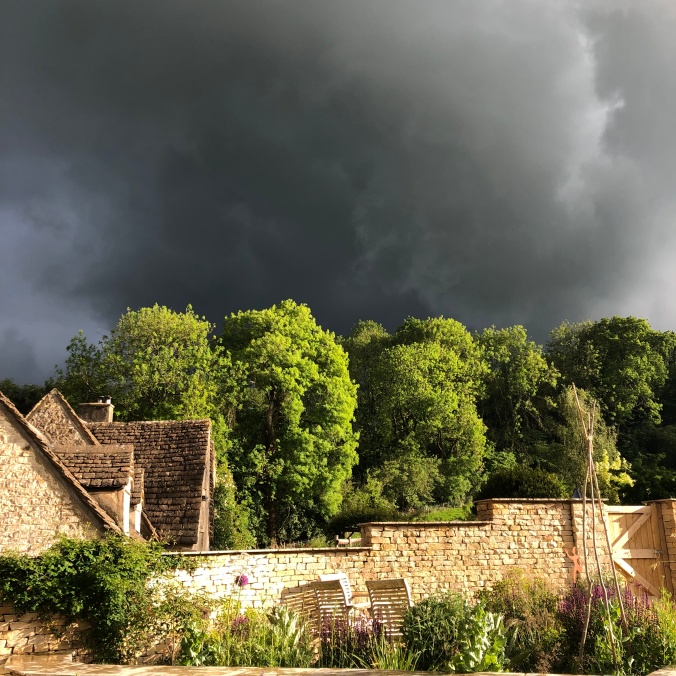 View From The Garden – Sun And Impending Hailstorm

June has been a very wet month so far but I suppose the garden and allotment needed the rain after such a dry Spring.  Few vegetables are growing quickly yet but the garden flowers are thriving.  Encouragingly, the bees flitting among them, between the bouts of rain, seem more numerous than last year.

Peonies Before Being Beaten By The Rain

Allium And Bees In The Garden

Partly due to the weather, Long-Suffering Wife and I have been watching more box-set TV recently.  Much of what we have watched has been excellent and I’m pleased ‘Killing Eve’ and ‘The Handmaid’s Tale’ have started up again.  Of recent TV treats, I particularly recommend:

We were able to see the last of these thanks to Youngest Son (YS) having access, in ways I’m not sure I want to know about, to channels and films that are not available to us through our normal facilities.  This has been just one of the upsides of having him around for a few weeks since he returned from Australia.  YS’s cheery demeanour has certainly brightened our days recently as the rain has set in.  However, he has now disappeared to undertake a video project in the US and left us with the rain continuing to pour down.

The Garden In A Hailstorm

Another very good mini-series, still currently ongoing, is Years and Years.  This follows a fictitious family through a vision of the next 15 years of global and UK politics and social development.  It is not a cheery watch since it picks up some of the most modern-day contentious issues and shows how they may unfold in the near future with pretty depressing effects.  One of the issues, of course, is the climate emergency and the story postulates a future where 80 days of heavy rain with flooding is a norm.  I’m fed up with the rain after a week; I can barely imagine a future where it rains for months!

I hope that the future is brighter – and not just weather wise – than Years and Years predicts.  However, I confess that the management of immigration, the climate emergency, the future of democracy on both sides of the Atlantic and the apparent rise of shallow populism are growing concerns for me.  It is fortunate, then, that YS keeps LSW’s and my rants at the radio news over breakfast and lunch in check (to a degree).  They may get ridiculous while he is away.

To help distract ourselves from precipitation and political current affairs, LSW and I have been to a couple of very good gigs over the last few days.  The first was very local at the refurbished Tetbury Goods Shed and featured a local band called Faeland who I didn’t know until a week ago but who are lovely.  They follow the folk music idiom but with bright, modern songs and an engaging presence. LSW loved them too – and very much enjoyed the provision of comfortable seating and a perfect view at the venue.

Faeland At The Tetbury Goods Shed

She was less enamoured by the shoulder to shoulder standing room only at The Exchange in Bristol.  Here we saw a singer-songwriter I have been following and enjoying hugely on Spotify and CD for a couple of years – Billie Marten.  I love her songs and, although she could have engaged a tight packed, eager and intimate audience a little more, I enjoyed the gig very much. LSW enjoyed it too but I was nervous about her comfort and we left just before the end.  That was fine since Billie Marten had already played for an hour and I may anyway get the chance to see her again in London.

Billie Marten At The Exchange, Bristol

As I complete this post, I see that the sun has come out.  I shall go out for a walk humming tunes from Faeland and Billie Marten and think cheery thoughts……

One thought on “TV Mini-Series And Music In The Rain”