One of the toughest things about coming back from South Africa has been readjusting to the English weather (‘you poor things’ I hear you cry!).  Long Suffering Wife (LSW) and I were lucky to miss the cold and snow of the ‘Beast from the East’ just as we left.  However, we returned in time for the mini version of that icy blast and, for the last week or so, have struggled to avoid the rain.

But today, April Fools Day, is sunny and bright!  Is Spring here at last or is this nature’s April Fool prank?

There are many signs of spring.  The sheep are back in the field opposite our house and their lambs will soon arrive, tree buds are becoming full and starting to open, the daffodils that survived the weight of the snow last month are out, and the birds are singing more enthusiastically.  As we move into April I am hoping that the rain will relent, there will be a sustained return to warmth and that this morning’s brightness is no false promise.

Since our return from South Africa, LSW and I have been planning our next trips abroad – to Paris and Porto in the summer – and getting back into familiar routines.  LSW is re-starting her part time garden guide job and resuming her slot in the village shop.  I have been walking, reading, catching up on the TV we missed while we were away, supporting Forest Green Rovers Football Club’s struggle to avoid relegation, and (seemingly interminably) painting the TV room woodwork a dark blue.  Both before and after our South Africa trip, I have been getting up a bit earlier and walking into Nailsworth before, rather than after, breakfast.  That has created space in the routine to do painting in the mornings as well as some afternoons.  Progress in the TV room has quickened a bit – though not enough for LSW’s liking – and one end is now done (provided no-one looks too closely). 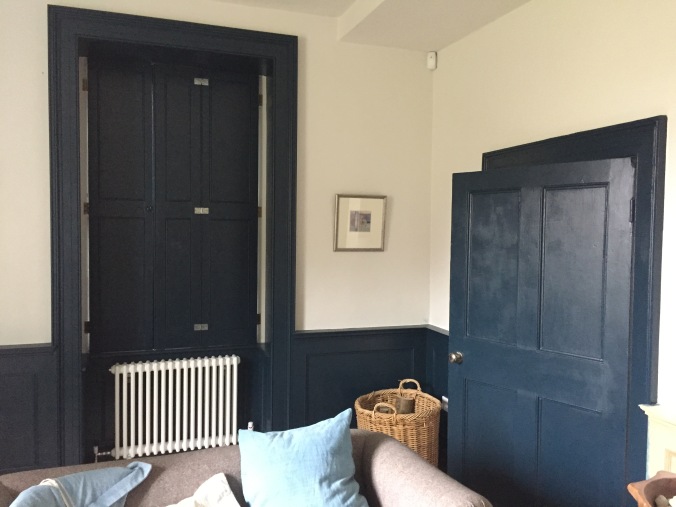 TV Room Woodwork Painting – About A Third Done And Proud Of It!

Both of us have also started digging in the garden and setting out seed trays but this has been rather tentative given the rain and sodden ground.  LSW is excited by a new walled garden she has had designed and built to replace part of our previous car park area.  Now she is in the process of inserting the first wave of plants.  I am trying to populate our small field with a greater variety of meadow flowers – another long term project I suspect.

The drift back into a routine has been punctuated by a few highlights.  On the evening of our return to England LSW and I attended a local event at which George Monbiot, a political and environmental activist, spoke about his latest ideas and book.  It was a very well structured and inspiring talk that was full of optimism in the face of what George, and many of us, see as clear political and social dangers.  The main message is that we need to defeat the neo-liberalism that dominates today with a new narrative that expounds the value of community, the household and what he calls ‘the commons’ which I understood to be assets owned and managed in common by communities.  A lot of this dovetails into thinking around the post-work society that may flow from robotics and other technical developments that eliminate jobs; this is a fascinating area.

Later in the week, LSW and I were both moved more than expected by the Italian, Oscar-winning film Call Me By My Name.  It is a gently-paced story of young (homosexual) love with some great acting, excellent music and a direct and important message about parenting.  The film was shown at our usually tedious cinema multiplex as part of a promising programme of one off showings of films beyond the normal diet of kids’ movies and action blockbusters; more please!

Then, just before Easter, we ventured out on a rainy trip to Wiltshire and Somerset to visit the Messums Gallery near Tisbury and the Hauser & Wirth outlet and gallery near Bruton.  The buildings were more interesting than most of the art but there were some startling pieces and we had a lovely lunch at Hauser & Wirth.  Certainly, it was better being out and about in the wet pre-Spring weather than staring at the rain from our back door. 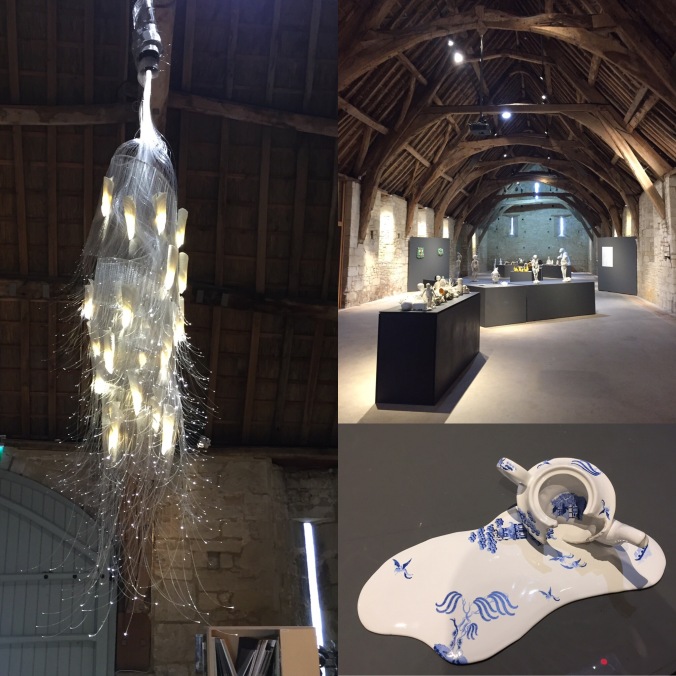 Spring: no more delay please. Let today be a turning point and hurry up and arrive properly!

4 thoughts on “Spring Or April Fool”